Player Of The Week: Fancesco Daun

Black Demons Win the Spanish U19 For 2 Years In A Row! 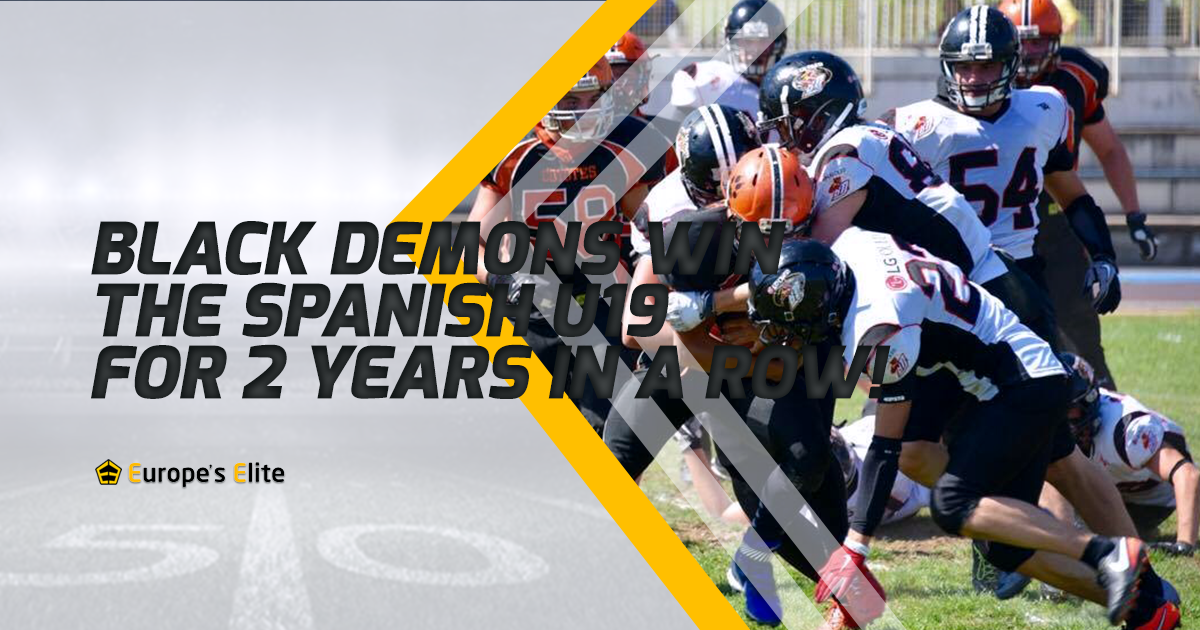 This year’s Spanish National Championship U19 was an unexpected and incredible Defensive war game. Both teams are well known for their powerful Offensive run game but as it is said “Defense wins Championships”. Only two Touchdowns and one Field goal were scored that day. Giving the defending champions LG OLED Las Rozas Black Demons another National title with a 6-10 victory.

The game was as hard as expected, both teams had an incredible Offensive game and Hard hitting Defenses. Game film was scouted, Players were focused and Coaches were ready.

Black Demons won the coin toss and elected to receive the ball in the 2nd half so Santurtzi Coyotes started their offensive drive.The First drive of the Coyotes was stopped due to an interception by the FS #21 Alejandro Santias for the turnover, but Demons didn’t manage to go through Coyote’s defense.

Coyotes made some adjustments and they ended up landing at the 8 yard line on Demons territory although a great Defensive effort stopped the Coyotes. After that, the first fumble of the game gave Coyotes an excellent field position at the Demons 20 yard line, but again, a pass was intercepted by SS #22 Pablo de Diego.

The first Half was an exchange of huge hits and turnovers. The scoreboard ended empty for each team.

The second half started with the first 6 points for Demons, added to the Scoreboard by an amazing 40 yards pass from QB #18 Hugo Minguez to WR #8 Elias Valenzuela. WR #81 Jorge Perez made the PAT for the upcoming 0-7 in the scoreboard.

Later in the 4th quarter and after a great defensive game by each teams, the Coyotes Offense added a 6 points TD on a 15 yards pass from WR #23 Jagoba Lopez to WR #10 Alvaro Garcia. (6-7 in the Scoreboard) Coyotes decided to for 2 point conversion, but they missed the try.

With no more than 4 minutes left in the game clock, Demons decided to run de ball. After getting a couple first downs and forcing Coyotes to use their 2 time outs remaining, Demons QB #15 Jesus Garcia scored the Field goal attempt that added the last 3 points of the game to the scoreboard. Ending an incredible Defensive Game with a Final Score of Santurzi Coyotes 6 – 10 LG OLED Las Rozas Black Demons.

Both Coaching Staff agreed this was the hardest game both teams had experienced through all the season.

Congratulations to the LG OLED Las Rozas Black Demons on a great season and for renewing the Spanish Junior Championship Title.