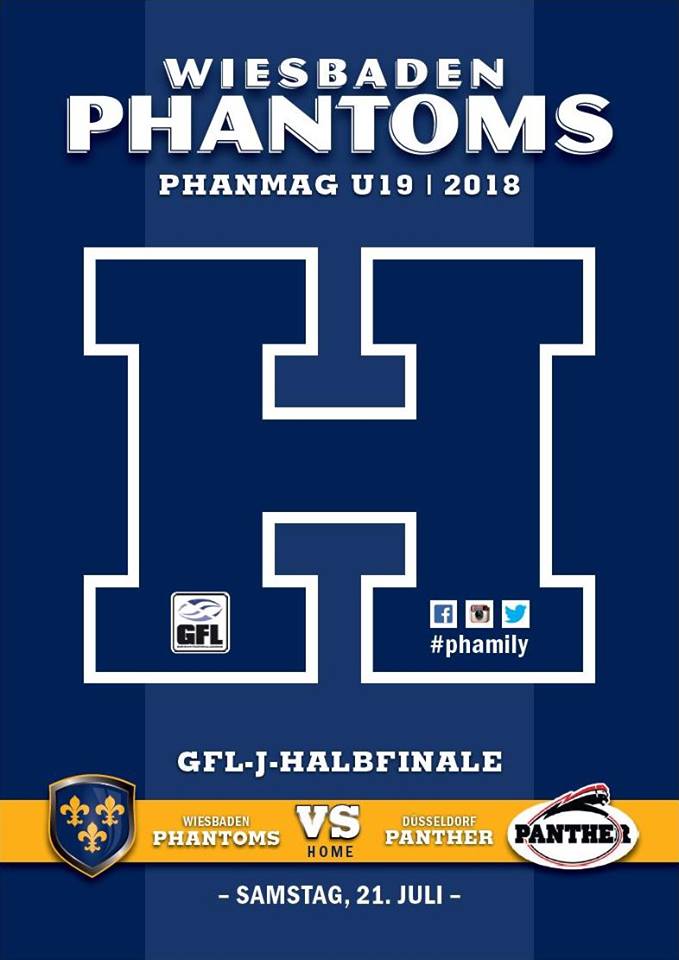 It’s the battle of the undefeated teams in the GFL-J semi-final this weekend, as the 8-0-1 Dusseldorf Panthers face off against the 10-0-1 Wiesbaden Phantoms.

The Panthers come into this one off the back of a narrow victory over the Schwäbisch Hall Unicorns, emerging as 16-12 victors against this staunch opposition. Head Coach Allan Verbraeken is hoping that the touch-and-go nature of the quarterfinal will have provided a wakeup call for his young team, who so nearly lost the game thanks to penalties and individual mistakes. Regardless, he is bound to be happy that his team was able to dig deep and win close games.

The Panthers will rely on their ground game to cause the Phantoms issues, with a strong offensive line and star tailback Hendrick Geis (who his coach described as running “like a man possessed” against the Unicorns) looking to put pressure on the Phantoms all game long. Meanwhile, Dusseldorf’s defence will try and replicate its nation leading form, with only 80 points conceded over nine games, making them the only team in Germany to average fewer than 10 points per game against. Not simply a unit which limits oppositions through strong fundamentals, however, the Panthers’ D will also aim to continue its streak of producing splash plays which have proved game-altering. Harlan Kwofie, for example, had two picks, returning one for the game-sealing score against Schwäbisch Hall.

The Phantoms will not be intimidated, however. They will look to unpick their opposition with dual-threat QB Tom-Emil Meissner. Meissner was picked out by both his own and opposition coaches as a man to watch thanks to his plus arm talent, as well as his outstanding mobility. He makes up one half of the Phantoms’ dynamic backfield, with Etienne Cardose providing another avenue with which to frighten the Panthers’ defence. Cardose is admittedly undersized, but his speed and work ethic have caused problems for oppositions all year long, and woe betide anyone who underestimates a player who Head Coach Christian Freund described as “one of the best young Running Backs in Germany”.

Coach Freund described his pride in his players, though laments that they will have to face the Panthers. Historically this matchup has not been a favourable one for the side from Wiesbaden, who have never beaten Dusseldorf in either the regular or post-season, being knocked out of the playoffs by them as recently as 2016. However, Freund feels that this is the team to finally break this streak. Will this prove the case, or will Dusseldorf’s domination of this matchup continue? This Sunday will provide the answer, and a place in this year’s GFL-J final!