German Delight as Teammates commit to the University of Virginia 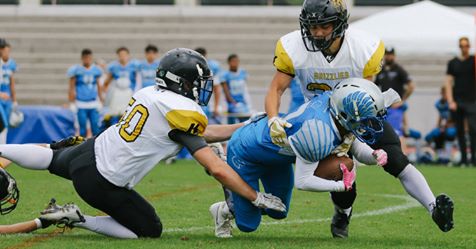 In this year’s Junior Swiss Bowl, the undefeated Geneva Seahawks will face off against the reigning national champions: the Bern Grizzlies. This is the Grizzlies’ chance to redeem themselves, as the Seahawks have been the only team to defeat Bern all season. Meanwhile, the Seahawks will look to continue their run of dominance, and return the title to Geneva after a three year hiatus.

The Seahawks come into this one with form on their side, as they are undefeated this season and have twice overcome the Grizzlies already this campaign! The Geneva outfit strike an incredible balance between offence and defence, leading the league in both categories. A 29 per game points average on offence is impressive, but staggeringly the team only conceded 35 points in 10 regular season games! Helping them achieve this is talent in at all three levels of their D. Opposition HC John Jordan pointed out FS Marc Perron and LB Justice Grec as Seahawks who he is particularly looking to game plan around. However, perhaps the most interesting piece of the Geneva D is their star D-lineman Emmanuel Kabengele. Kabengele played for the Grizzlies for three years, before transferring to the Seahawks this year, and his impact has been profound. This added element of playing against his old team could prove a storyline to watch.

The Grizzlies, meanwhile, have pedigree and a championship mentality seeing them through. The Grizzlies retained much of their talent from previous years, and so certainly boast a team that knows how to win championships. Indeed, Coach Jordan likens this year to last – coming up against a seemingly unassailable team, but overcoming through training and sheer force of will. He will of course hope that this comparison is apt, and that his side do overcome its underdog status. Aiding him in this goal are his star skill players in QB Matteo Schlapbach and WR Dom Stucki, each of whom their coach believes to be the best in the country at their respective positions. These two playmakers will certainly need to be on their game to overcome the aforementioned defensive behemoths of Geneva, but it is certainly possible, with this connection alone amassing 9 touchdowns through the air this season.

We eagerly await to see the results of this one! With some of Europe’s best talent on display, and the promise of silverware, this is bound to be a barnstormer!

To satiate your need in the meantime, however, here are the highlights from Bern’s semi-final victory over the Basil Gladiators