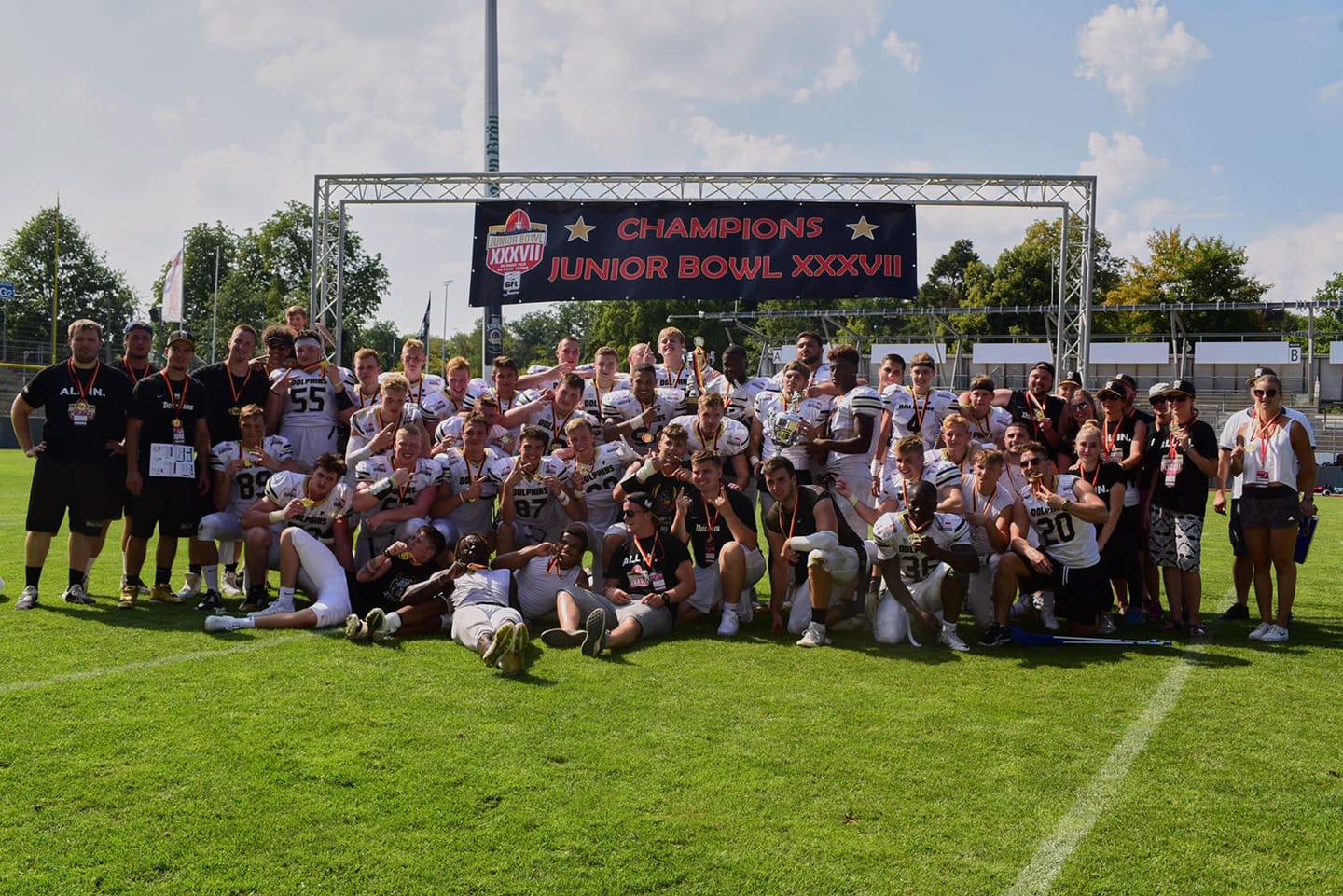 This weekend saw the crème de la crème of Junior football in Europe as the GFL-J Final took place between the Paderborn Dolphins and the Dusseldorf Panthers. The traditional rivals squared up in what was a rematch of the 2017 final, knowing that this would be a fiery affair between two premier teams. The 2017 final had favoured the Dolphins, but the season thus far was suggesting a Panthers’ victory as the only undefeated team left in the country. However, despite the greatest efforts of the Panthers’ players and coaches alike, history was to repeat itself with the Dolphins coming out on top by the narrow margin of 21-14.

The Dolphins O demonstrated its big play ability from the start, ripping off huge chunks of yardage on several passing plays in the first quarter. Luke Wentz looked every bit the D1 scholar, keeping his eyes downfield while extending plays with his deceptive mobility, getting his team into the red zone early. The Panthers’ secondary didn’t make it easy either, consistently offering up good coverage and laying some huge hits on the Dolphins’ receivers. Indeed, the Panthers’ D was able to tighten up near their endzone, preventing a first quarter score by forcing a fumble from Wentz and recovering it.

Entering the second quarter, and Dusseldorf were unable to take the pressure off their defence, with the Dolphins forcing multiple three-and-outs. Head Coach Allan Verbraeken said his offence “slept through the first half” which of course caused issues for a progressively more worn-down defence. The Dolphins eventually drew first blood mid-way through the second quarter as Wentz dove into the endzone to break the deadlock. He followed this on his ensuing drive with a beautiful deep ball for a 75 yard touchdown, despite taking a hit after releasing the ball.

Going into the second half, the Panthers knew they would have to try and reverse the momentum if they were to stand a chance. However, an audacious fake punt was stopped, and whilst the Dolphins’ were unable to capitalise on a short field, the deficit remained.

It was another special teams mishap that allowed in the third, and pivotal, touchdown for Paderborn. The Dolphins blocked a Dusseldorf punt, recovering it at the 3 yard line. Cometh the hour, cometh the man, as Wentz took matters into his own hands once again, taking the ball round the edge and diving in at the pylon for his third touchdown of the match.

The Panthers deserve enormous credit for refusing to capitulate, and their perseverance almost payed off. A bomb from young QB Lucas Wevelsiep floated a ball down the left side line to a streaking receiver who met the ball in stride for a 50 yard touchdown.

Finding their rhythm, the Dusseldorf outfit started applying pressure of their own. Unwilling to allow Wentz to steal all of the limelight, Wevelsiep took a pitch option himself, weaving his way into the Paderborn endzone. Despite this late surge, it was unfortunately too little too late for Dusseldorf. Despite knocking on the door, and getting within 10 yards of the Paderborn goal line, the final score proved elusive.

Congratulations to the Dolphins for retaining the title and their place as champions of Germany! A dynasty is forming in Paderborn, though it will be interesting to see how they accommodate for the loss of such generational talents as Wentz, and fellow University of Virginia commit Kariem Al Soufi. Meanwhile, the Panthers will take time to lick their wounds following this loss, but will no doubt be determined to return stronger than ever!