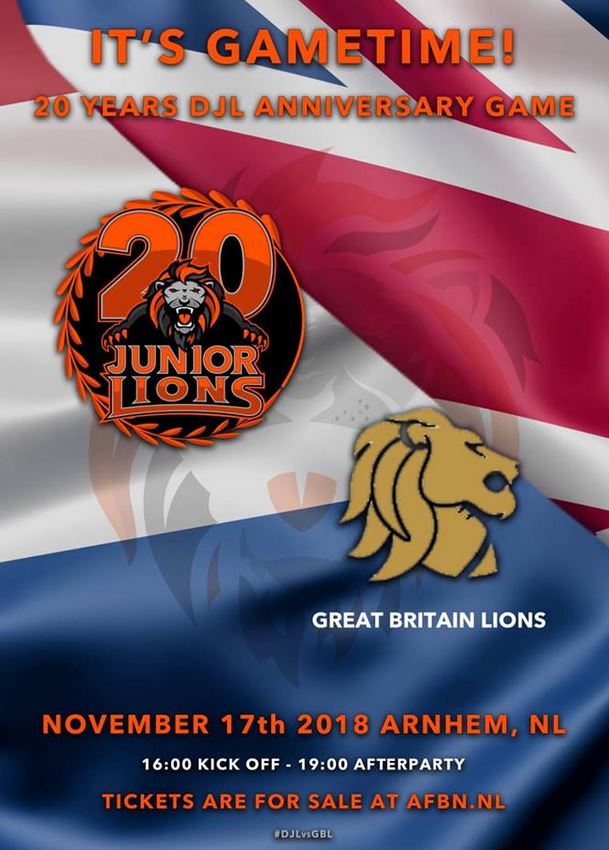 This weekend marks the long-awaited return of Great Britain’s under 19s programme to the international stage! After a four-year absence from this level of the sport, they will face the Dutch Junior Lions – a prolific and experienced team. It will no doubt be fascinating to see how these young do, pushing each other to the absolute limit.

Great Britain will be excited to get back to international competition with this fixture. A four-year absence from the game, and a domestic league in which a 9v9 format is utilised, could leave the British Lions at somewhat of a disadvantage. However, OC Neale McMaster believes that what his team “lack in experience, [they] make up for in athleticism and ability”. Certainly, there are some impressive ‘ballers on the GB side. Captain Jacob Mann, for one, honed his craft in arguably the toughest junior league in Europe, the GFLJ, with the Stuttgart Scorpions. Mann is also currently training with reigning Southern Premiership University Champions the Birmingham Lions, to prepare himself for the 11-man game. Meanwhile Toby Naylor, who plies his trade at the prestigious Filton Pride, is also internationally recognised, having won an MVP award at our Vienna Camp this summer! The GB Lions will be hoping to utilise these talented individuals (as well as the many others not mentioned) to make up for their inexperience, and cause the Dutch fits on the day.

Despite GB’s absence from the international game in recent years, there may still be some familiarity between the players of these teams. This is because Filton Pride have seen an influx of Dutch Under 19s in recent years, which may well lead to a personal element to this particular battle. Indeed, the starting QBs for both teams (Jason Denneboom for the Netherlands and Louis Benzy for GB) are both Pride players, as well as a smattering of skill players across the teams. With such a key position being filled on both sides by domestic teammates, sparks could fly and bragging rights be secured! However, this game goes far beyond bragging rights for the Dutch Junior Lions, who have history behind them in this one. This game marks a celebration of 20 years of the programme – in stark contrast with the infancy of this iteration of the GB team. Such experience of the 11-man game is bound to inspire confidence amongst the Dutch players, who will look to prove themselves as the preeminent powerhouse in the region!

How this one will turn out is truly a mystery. By all accounts, the more experienced team should have the upper hand. However, it would be foolish to write off the Brits at this stage, as they will no doubt look for an explosive return to international under 19s, trying to prove a point to the rest of Europe that they are here to stay.