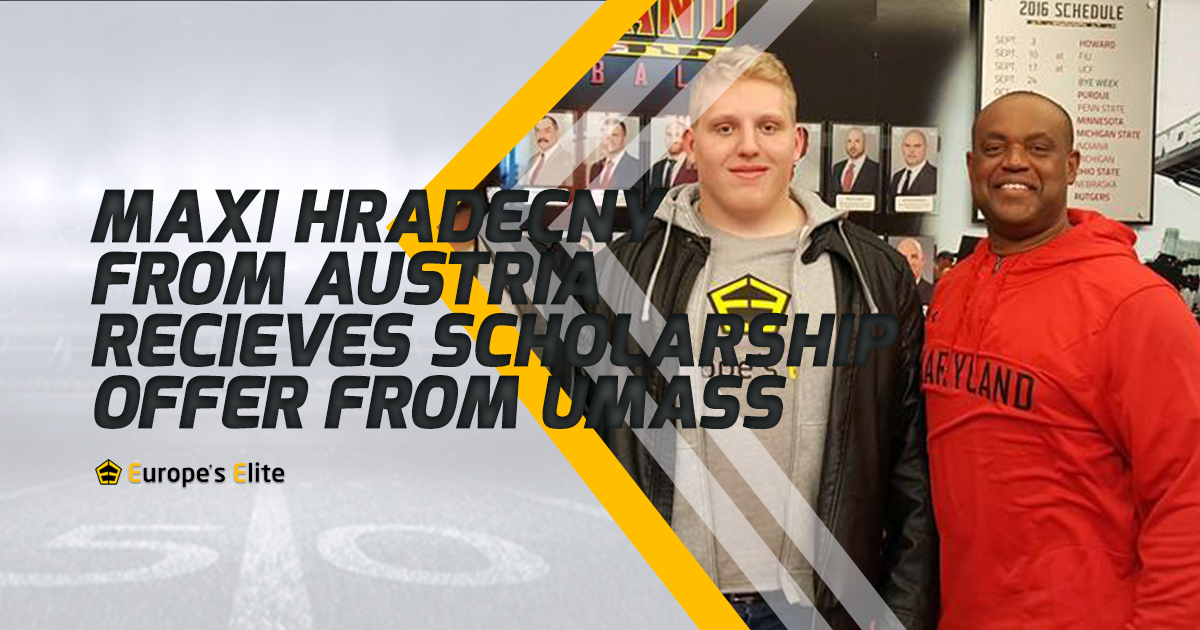 Defensive lineman Maxi Hradecny from Vienna, Austria is currently in the United States visiting a number of major American colleges. All are interested in signing the promising 19-year-old lineman to an American football scholarship but UMass (University of Massachusetts) made a solid full scholarship offer. To date, Hradecny has visited the UMass, Ohio State, Maryland, Albany, Akron, Penn State, Stony Brook, Fordham and Pitt.

Hradecny, who has played for one of Europe’s top American football clubs, Austria’s Vienna Vikings, since he was nine years old, and is an anchor on the U19 Austrian national team, found out about Europe’s Elite, after reading about Tibo Debaillie, a young Belgian lineman who is now headed to Towson University.

The 6’3, 312 lbs Austrian put up eye popping numbers for a player his size including bench pressing 225 lbs 25 times, and in his position drills he displayed a high level of coaching and learning Collier said

According to Brandon Collier, one of the founders of Europe’s Elite, Hradecny has attracted a great deal of attention:

“Maxi is our second athlete to receive a Division 1 scholarship! He has schools big as Ohio State very interested in him and I feel there is a strong chance they will offer him a scholarship in the near future. Umass is of course my former college and they loved Maxi as a player and decided to offer him a full scholarship. But Maxi  actually has three scholarship offers currently and is waiting on others to come through.”

“What your doing in Europe is great and God bless you for this.”

Hradecny and Collier were invited to stay an extra day at Ohio State, to give the young Austrian a chance to experience the intense atmosphere of practice during the week leading up to the Michigan game. Needless to say, Hradecny was a little star struck meeting Urban Meyer which is understandable for a player who only a few months ago did not realize the opportunities he had to play college football.

Hradecny will have some very big decisions to make in the near future as he continues his trek through top-flight US  colleges. He and Collier have visited 11 schools in 10 days and are now headed to West Virginia, Indiana and Kent State. The trip may be exhausting but the reward will definitely make it worth it.

Link to original article:
http://www.americanfootballinternational.com/maxi-hradecny-recieves-scholarship-offer-umass/
About AFI: American Football International is the largest source for the latest news and updates about American Football outside of the United States.