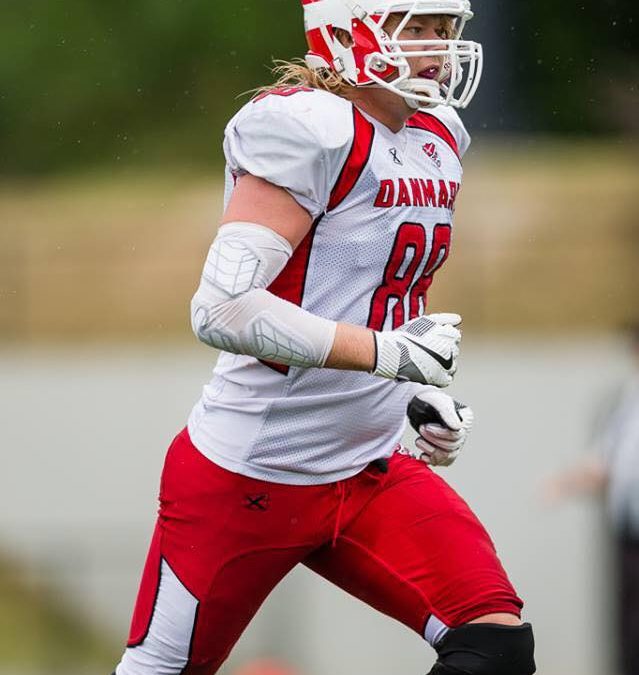 Albert is a powerful force on the defensive line. he uses his tremendous size and speed to his advantage in the pass rush and in being a stopping force in the run game. Recently committing to  Central Michigan University.

I’ve been playing for almost 10 years now, I started right before I turned 12.

My strength as a player is my long arms so I can get good separation between me and the offensive line. It makes it harder for them to grab on to me. And I would also say my athleticism compared to my size.

I’ve always been a big fan of watching Clay Matthews play, because of his big motor, high energy and I love the way he makes contact. He was the reason I became a packers fan. I also love watching Suh and JJ Watt because they are some freaking big athletes that can move like hell! Last guy is Khalil Mack, because he is so good at reading the offense, and I love the way he pass rushes.

My expectations this year is to become as good as I possibly can doing what I love. I can’t wait to practice everyday with coaches that have had so much experience, and players that are chasing the same goal! The ultimate goal is probably to become a starter throughout the first season. I’m also really excited to meet a hole bunch of new people. That’s is also one of the reasons of why I’m doing this. Can’t wait to start school either.

How did you find the recruitment process and what ultimately made you decide on Central Michigan University?

It started in the start of 2018 when I looked at my mail. I saw that I had been contacted by 16 schools I didn’t know who they were or anything, I only knew about some teams. At start I thought it was a joke, I never really felt like I was good enough to play college in the States. So I kind of ignored it. They kept contacting me, and I asked my coach Jan Hamburger about what was going on. He told me to ask the national team coach Lars Carlsen. We looked at the schools that contacted me, and it was all JUCO, Community colleges and stuff. Nothing big, beside Washington Huskies, but it was only the assistant recruiter that contacted me and it didn’t go further with them. I received an offer from Towson University and a couple weeks after that from University of Buffalo. I got really excited and they told me they wanted me for the spring enrollment 2019.
I signed up for the ACT test, I couldn’t take it in Denmark so I signed up for it in Hamburg, Germany in September. I drove all the way down there 5 days before the test so I could concentrate on the studying for the test. I showed up for the test Friday morning, and the server went down. I drove all the way down there and back for no reason. They did a rescheduling for the test at the start of October but I wasn’t informed about it like the others. But I signed up for a new test in the end of October drove down there the day before, showed up for the test, tired after the long drive and unmotivated to study. This was my first time experiencing the test and it went awful. I had to sign up for a new test.  We tried to make a rescheduling of the test, but it wasn’t possible. That resulted in me not being able to have my test score for the signing days. I sadly signed up for the test, knowing that I might not get a scholarship offer again. I took the test, and Coach Gus from Towson university told me that their offer remained for the fall 2019 enrollment. He came visiting me at home in Denmark, great guy! They wanted me to come visit the school. Right before the visit I received an offer from Central Michigan University. I visited Towson university March 1st-3rd with my mother. It was awesome to finally see what I’ve been fighting for, for so long. It was awesome, I loved to see how football was a part of the school and all the facilities that we would never see in Europe unless it’s soccer. It was an awesome school, I couldn’t imagine anything better.
CMU invited me for a visit March 21st-24th. Both of my parents and I got there Thursday night. Friday morning we were ready for the visit to start! I was showed around campus and met all the coaches and some players. I saw their awesome facilities, everything was bigger and way above my expectations. Then I saw the stadium and I fell in love. I got to watch their spring football practice, and I love how fast it everything goes, nobody is doing nothing, everyone is moving and it was way more structured than what I’ve been used to. After that I went straight to the coaches and told them that I wanted to commit! We celebrated with some good food with the coaches, their wife’s, and Bernhard Raimann who is a guy from Austria he is their TE. He was my host, he introduced me to many players and showed me around campus. They were all so welcoming, and I love that. That’s probably one of the biggest reasons why I chose that college. I have to work with those guys every day all day. The last reason would be the coaches, they were awesome and they have so much experience. The defensive coordinator was a DL coach in the NFL, and the strength trainer was the strength trainer of the Tennessee Titans for 14 years, and the head coach was the offensive coordinator of Alabama. The DL coach was awesome and seemed like a great coach on the field. That was all together what made me choose Central Michigan University.