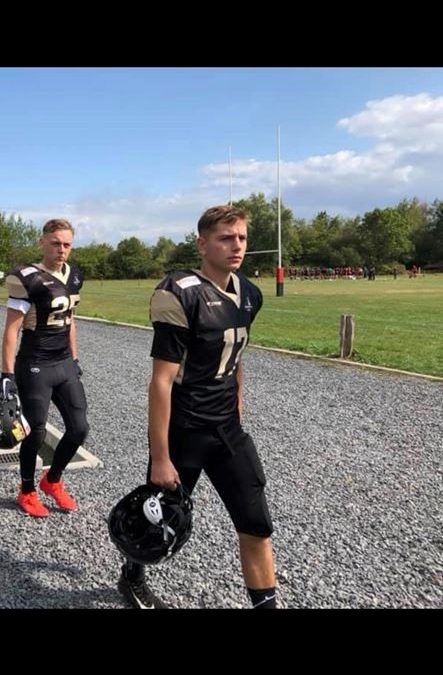 This is part 1 of a 15 part series covering the top athletes from every U19 team in Belgium.

You don’t hear a whole lot when it comes to star players in the U19 Belgian American Football League (BAFL).  Youth football and football as a whole, is still in its infant stages within BAFL.  For Adrian Bajraktari of the Mons Knights, he remembers when youth football wasn’t even an option for him when he strapped on pads at just 12 years old.

The 5’10”, 187lb, 17-year-old doesn’t look more intimidating than your average athletic teenager.  Bajraktari is quiet and reserved for the most part.  Well-mannered and respectful, he greets each of his teammates and coaches, one by one before changing for practice.  When you look at him in the eyes, you can tell there is something going on in that head of his. Not a lot of people can figure it out but Nick Granado, Head Coach for the Mons Knights, can tell you exactly what’s going on in Bajraktari’s head: “It’s football…he just doesn’t stop.”

When Granado took over the Knights in 2017, Bajraktari was wearing worn out pads and running down ball carriers twice his age.  When Bajraktari stepped onto the field for the first time, he was warned: he was the youngest player, and nobody was going to go easy on him because of it.  To top everything off, Bajraktari wasn’t allowed to play on gameday due to his age, so his only purpose was to serve as an extra body during practice.  Most kids in Belgium would have went back to their soccer clubs-Bajraktari stayed.

Bajraktari started his football career at QB for the scout offense at practice.  Granado brought a staff of college and US high school football experience with him to the Knights.  Once he got enough players on the roster, Adrian was moved into the DE spot for the scout defense.

“I didn’t think it would materialize into anything, but I quickly noticed his lack of fear when up against players nearly twice his age.  That was my first sign that Adrian was unlike any other young football player I had ever seen. Fast forward another year when we were able to develop the first U19 team for the club and there was no debate that Adrian would not only play QB but DE for the team as well.”– Granado.

In 2018, with the help of some players from the U19 Charleroi Coal Miners, the Knights were able to form their first U19 squad and compete in the national U19 tournament.  Adrian was sent back to the QB position to lead the charge and also tighten up the pass rush for the defense.  After a successful season, he was granted a waiver to suit up with the senior squad for their 2019 season.  Granado knew it was the right move: “When he got to suit up for an official senior league game, I think that is when the mental switch officially turned on.”

That switch is still on.  Bajraktari caused rival offensive line coaches to scramble on the sidelines as he would get off the snap and penetrate the pocket before anyone could do anything about it.  Due to his size disadvantage against adult players nearly two times his age and weight, he’s improved his explosiveness to beat linemen off the ball in pursuit of the ball carrier.  He is now a critical asset for the Knights senior defense as well as the senior captain for the U19 squad.  Now, offenses have to strategize around him and figure out how to contain Bajraktari’s edge rush.  He leads the team in tackles and is an all-around utility player who undoubtedly blossom under technical position coaching.  I can go all day on how much this kid is a game changer in the Walloon region for the U19 league, but we’ll let you read it from Granado and Bajraktari themselves.  We held a virtual interview with the two to talk about how bright the future is for the young pass rusher:

Coach Granado, give me your rundown of Adrian’s best game you’ve witnessed:

Granado:  In September we drove up to Ostend to play the U19 Pirates who were undefeated just as we were. There is a bit of a limitation for Adrian in this game as he not only showed up late, he also forgot his game pants. I have known Adrian for 2 years now and I know it was a genuine mistake.  Nonetheless, I benched him for the first half.  Adrian responded to the punishment the only way he knew how to, and that was to wreak havoc in the second half. He ended up with 8 tackles, 7 TFLs, 5 sacks, 4 QB hurries, 1 blocked punt and 1 blocked FG.

How is he off the field and in the classroom?

Granado:  Adrian is great off the field. His grades are improving each year and I think his commitment on the team has played a huge factor in his life.  I was told before I arrived at the Knights that he was much more stubborn and harder to deal with, but I attribute that to him being a pre-teen when he got started.  His parents are very supportive of him and it shows with his development.  He helps his mom by working at her business and is constantly in the gym working out when he’s not doing anything else.

How does he handle adversity on the field?

Granado:  People just admire him, and it gets his teammates to play harder.  When the team is winning and he is doing well, Adrian is the first one to recognize the success of others.  He has evolved into a very selfless leader and it shows.  He went from being the hardheaded kid who didn’t understand football, to a role model for new kids just learning football.  He leads by example-no doubt about it.

What plans do you have for him regarding development?  Where do you see him in the next two to three years?

Granado:  He’s fully committed to the DE spot now.  With him rising into the senior league, a lot more is going to be expected of him, so he will be attending as many camps as possible this next year so he can end his last U19 year strong.  I have no doubt in my mind that he will be the top DE in Belgium in two years and he will be one of the top prospects in Europe.

Granado:  Adrian is stronger and more confident each season. It shows on and off the field but most importantly the way he brings others with him to his level. He does not leave anyone behind, and it is truly inspiring to witness someone at his age be so consistent in his character as a young man. That’s why I say empowered, because I think he believes he is meant to lead regardless if he is playing a sport or doing anything else. He lifts others and helps them believe they can do the same.

*We shift the mic over the Bajraktari:

Are you enjoying football right now?

Bajraktari:  For me it’s the best sport in the world. But first it’s the most complete sport because not only do you have to be strong and fast, but you have to know all tactics and plays. A lot of Europeans don’t realize it’s the most strategic sport you can ever play because there is always a reason behind every play-that’s why I love it.

Why do you prefer DE?

Bajraktari:  I prefer DE because that’s where I feel best on the field.  I like to hit the quarterback like any defender would and I just feel natural in the position.  I’m a DE but I can play anywhere my coaches need me.  For the 2019 U19 season, I played at DE but also quarterback where I threw two touchdowns.  I’ve also played offensive line and receiver.  I’ve even punted for the senior team when the punter was out injured for a game against Andenne Bears.  I can play anywhere any coach needs me to play and everyone knows I will put my heart into any position for the team.

What do you think about the competition level of U19 in Belgium?  Is it enough or do you need more?

Bajraktari:  I think we have a great level for Europe but in Belgium we don’t have a lot of help to develop the sport and that’s why we are not the best league in Europe. I’m always looking for a harder challenge and I think I will be ready for it when I try out for the national team next year.

Most memorable game for you?

Bajraktari:  My first senior game last year where I was not a starter but then Coach Pat put me on the field. At first, I was scared but when the ball snapped, I just spun around the lineman and made a hard hit on the quarterback. After that play, Coach Pat let me play the whole game.  10 minutes later, the quarterback saw me coming through the pocket and instead of pitching the ball to the RB, he pitched it to me by mistake. That quarterback was 20 or 21 and I was just 16. Coach Pat said he he had never seen that in 30 years of football.

What do you still need to work on with your game?

Bajraktari:  That’s tough to say because there is a lot, I feel I need to improve to be the best possible asset for my team.  Right now, my priority is my lifting workouts and to get stronger for the upcoming senior season.

How far do you want to take this football career?

Bajraktari:  I want to help lead the senior team to a Division I championship and finish my last U19 year with a championship.  After that, I want to go play at that Independence Pirates school you see on Netflix.

Bajraktari:  No not really, but it would be cool to play in the US.  My dream is to play for Coach Mullen and the University of Florida Gators.

Let’s get down to the interesting stuff.  Favorite NFL team?

Bajraktari:  I don’t have a team I like; I just follow players.  Right now, Aaron Donald is my idol.  He outworks everyone and he is unstoppable on the line.  That’s what I want to do.

Bajraktari:  5 or 6 eggs and either bananas or apples.

While most Bajraktari is still growing mentally and physically, there is no doubt this kid will be a force to be reckoned with as he continues to compete and train year-round in the country where football is still relatively young, and facilities are next to nothing.  For many Belgian U19 college hopefuls, combines and clinics don’t really land in Belgium often, so to see players like Bajraktari compete the way they do is a testament that this league has some true potential.

According to his teammates and other sources around the league, Bajraktari is likely to become the top DE in the southern Belgian region for BAFL U19.  He is slated to attend the Wilson Level Up camp in France this summer hosted by Europe’s Elite.  Bajraktari’s next debut will be February 23rd, 2020, when the Mons Knights take on the visiting Andenne Bears to kick off the Senior season.

Europe’s Elite is your source for covering all stories in Europe like this. Justin Cox writes and produces content on international football for Europe’s Elite.  He resides in Texas with his family where he is stationed with the military.  He also coaches for the Fort Hood Knights, a semi-professional team.  Dream Elite. Reach Elite . Be Elite.