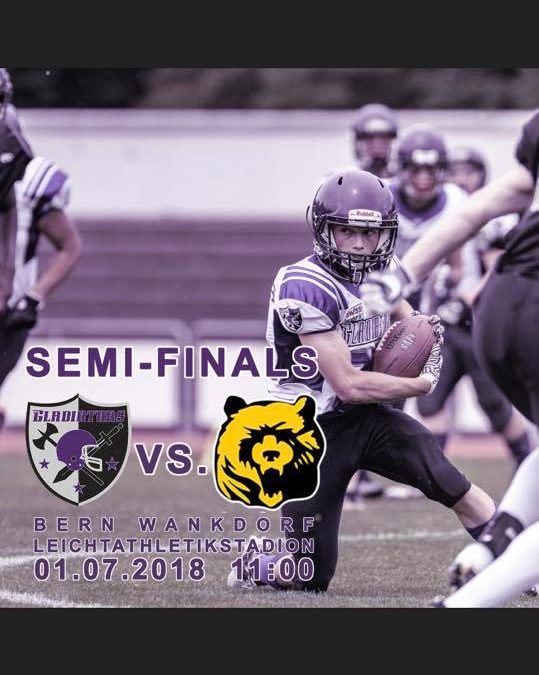 This weekend, the 7-2-1 Bern Grizzlies face off against the 6-3-1 Basel Gladiators in the Semi-Finals of the Group A Championship. Following a disappointing season from each team, these outfits meet up earlier than many would have expected going into the season. Indeed, with the Grizzlies being last season’s National Champions, and the Gladiators holding that honor the year previous, this game has the look of a final! Add to this the fact that this is a rivalry match, and there are bound to be fireworks come gameday!

The Gladiators were particularly disappointed with their season, playing vastly under expectations. Head Coach Robin Haas has been pushing his team hard, with tri-weekly training sessions since September setting them up to play good, fundamental football. Grizzlies HC John Jordan recognises this professionalism, noting that the Gladiators will not beat themselves through mistakes, and so will prove tough to break down. The Gladiators’ offence has responded well to this extra coaching, racking up the second most points in Division A, which has led them to many a victory. Defensively, meanwhile, the Gladiators will have to step up and perform as a unit according to Coach Haas, having allowed in 30 touchdowns in their 10 games this season.

The Grizzlies, meanwhile, started their season off slowly with turnovers and special team miscues dampening the team’s effectiveness. However, since then the team has gone from strength to strength, winning five of their last six games. Key to their offensive strength has been their aerial attack, with the QB-WR duo of Matteo Schlapbach and Dom Stucki challenging as the most threatening in the whole nation! Schlapbach has had an injury plagued season, but when he’s on the field he’s been electric, amassing 10 touchdowns through the air and a further 9 on the ground in just five games. The dual threat QB has also put up over 1400 yards of offence in that time, no small feat! The Grizzlies’ defence, meanwhile, have turned into a turnover machine the second half of the season. Whilst the unit is strong across the board, particular mention should go to linebacker Joël Moret and DB Nicolas Horni for their ridiculous stat lines. Moret has 5 Sacks, 4 Interceptions, 3 Forced Fumbles on the year, whilst Horni seems to intercept most passes thrown in his directions, accruing 8, whilst returning two for touchdowns.

This matchup should prove fascinating. The pedigree of the two teams, combined with their rivalry, should make for an outstanding game of football, with some of Switzerland’s premier talent on show. We cannot wait to see how this one pans out!