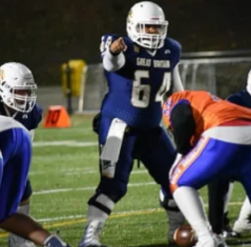 Football is won in the trenches and it all starts with the Centre. If your Centre isn’t on his game, then it’s most likely to be a hard day. The Centre and the Quarterback are the only players that handle the ball every play. You need a consistent, strong, and intelligent player to hold the Offensive-Line and keep the team stable. Today, we have a player that’s proved all of this for Great Britain at junior and senior level, also in the European leagues and at Uni competition. Theo Eddy, of the University of Birmingham.

Theo is a student-athlete who is a travel player for the Munich Cowboys II. He successfully showed off his ability to perform against high competition in other countries and, has moved onto the next levels with a seamless transition. As an offensive lineman, Theo has racked up pancakes after pancakes with Pride, Birmingham, Great Britain and the Cowboys. He’s also captained at U19 GB and recently moved up to play Swede, at the men’s level. Overall, the competition that he’s been playing against ranges at different levels around Europe; showcasing talented in diversity regardless of language barriers or other hurdles. Which is very admirable.

Since joining Pride in 2017, Theo uncoveredred a great amount of potential in both run and pass protection. During the film we can see the blitz pickup ability is something special, he can pull from the guard for pitch plays just to add to his versatility. However, one of his best qualities I believe to be is Theo playing to the whistle. As my former coach used to say “Did you impact the play?”, I took this into account while studying and analysing Theo’s highlights. Subsequently, I realised that every time he played, it was with a combination of ferocity and good technique. His cut blocking and low stance are examples of a player who can turn disadvantages into advantages. Furthermore, since coming back from his time in Germany, he has added second level blocking and bringing the fight to the line-backers to his portfolio. Lastly at UoB, double teams are his newest acquisition to his transformative game, so only time will tell what he can add next.

One disadvantage Theo has, is his height. Recently he has started to use this as an advantage standing at 5’11 and weighing 280lbs. He is a weight room phenom having gained considerable size in the last two years. What he doesn’t have in height he makes up with raw power and strength, paired with fundamentals learnt from the best in the business.

To conclude, Theo has massive upsides to all of his game, he has taken a part of every team he has played for and added it to his expanding capabilities. He has become an anchor in the middle of the line and solidifying the first front of attack for the offence. My pro comparison would be Alex Mack of the Atlanta Falcons, with great hand speed, pancakes and great goal line run blocking, it’s easy to see the similarities.