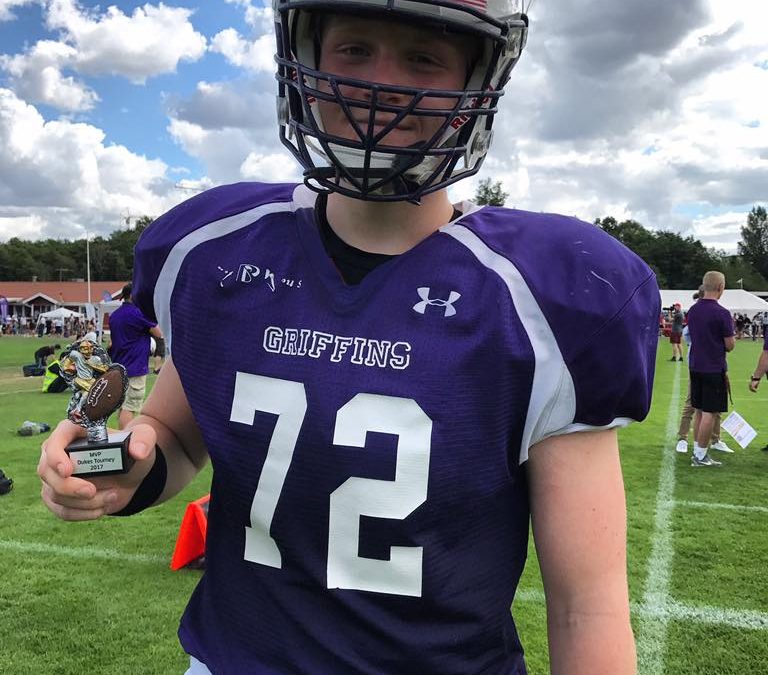 Europe’s Elite had the chance to catch up with Carl Wikenhed who is an Offensive lineman from Sweden class of 2021. Carl was just recently accepted into Sweden’s top football school the RIG Academy under the direction of Robert Johansson. ”It feels great being selected to the RIG academy, the thing that I’m the most excited about is being able to practice against the best in Sweden every day. It is also going to be great to have national team coaches on each practice so that I can see what I need to improve on” said Wikenhed.

Carl has been playing football since he was 8 years old as is now developing into one of the top offensive line prospects for the 2021 recruiting class. Carl who is 15 years old already has the frame college coaches are looking for, standing at 6’3 232 lbs. Wikenhed also has the work ethic to further develop his frame to play at the next level. He gets his inspiration from his favorite player JJ Watt. ”I don’t really have a favorite OL-player but my favorite player in general is JJ Watt, he has been my inspiration for many years because of his work ethic and how he stays after each practice and keeps going for a while” said Wikenhed. Even though Carl does not have a favorite OL player he has the mindset to dominate up front ”My favorite thing about playing OL is the feeling when you get a really good pancake or when you get a serious drive block.

Carl is a very versatile player, he plays both OL and DT/DE, which will be very useful for a college coach. Over the last year he has shifted more to the offensive side of the ball to play OL, but still can creates havoc playing DL!
Carl will defiantly be one to watch for 2021.

Check out his highlights below: