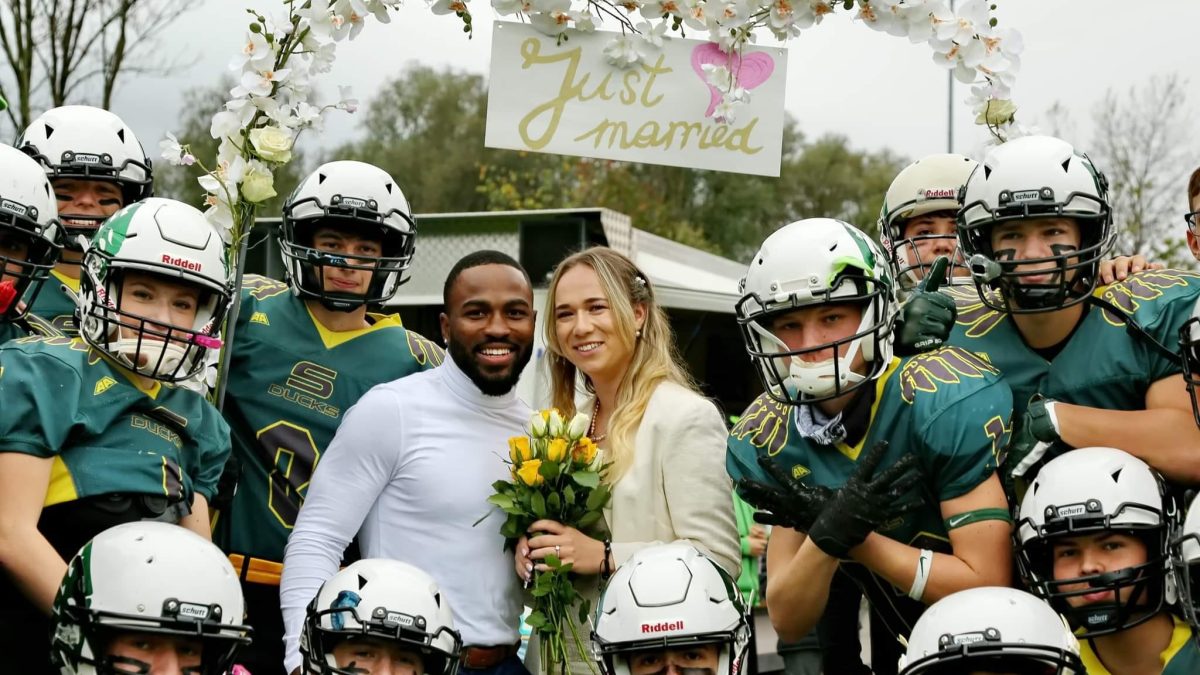 On Saturday, both the U14 and U16 Ducks secured a place in the playoffs.
Both teams won their games comfortably.
But the highlight was something else, U16 HC Jamario Howard got married in the morning and was back on the field with the bride and team in the afternoon.
Our heartiest congratulations to the newlyweds.

The U14s prevailed 24:6 against the AFC Mödling Rangers. The beginning was a bit bumpy and the Rangers were able to take the lead. But then the youngest ducks didn’t miss a beat and struck back impressively.

HC Christian Rödig:
“Today we played against a physically strong opponent who made a lot of demands on us.
In the beginning we made life harder than necessary with trifles and unnecessary penalties. Nevertheless, the team always showed fighting spirit and played very good football, especially after half-time. That shows character and makes me proud to be the head coach of these youngsters.
I would like to particularly emphasize Sebastian Minkenberg, who has always played reliably in many unfamiliar positions today. Lean Lukas was our anchor on offense and delivered one highlight run after the other. And Leonidas Sendere didn’t get discouraged after an allowed touchdown, but still delivered a great game and caught an interception.
If we find our way into the next games even faster, anything is possible for these U14s.”

With 44 to 20, they also clearly prevailed against the Vorarlbergers and thus also reached the playoffs undefeated.

HC Jamario Howard:
“Today was a great day for the U16. I told my kids at the start of the week that if they wanted to win this game then they would have to play 4 of the toughest quarters of football that they would ever play. We started off slowly in the first half but in the second half Mihael Milojevic got the game started with a 75 yard touch down run. After that Tristan sendele had one of the best pick six’s i have ever seen. As a coach you love to see moments like that. Yonatan Escobar was unstoppable on defense and would seem to be all over the field today. Im super proud of the goals we have accomplished this season but now we are ready to accomplish bigger goals with the playoffs in our near future. Today was a special special day.”