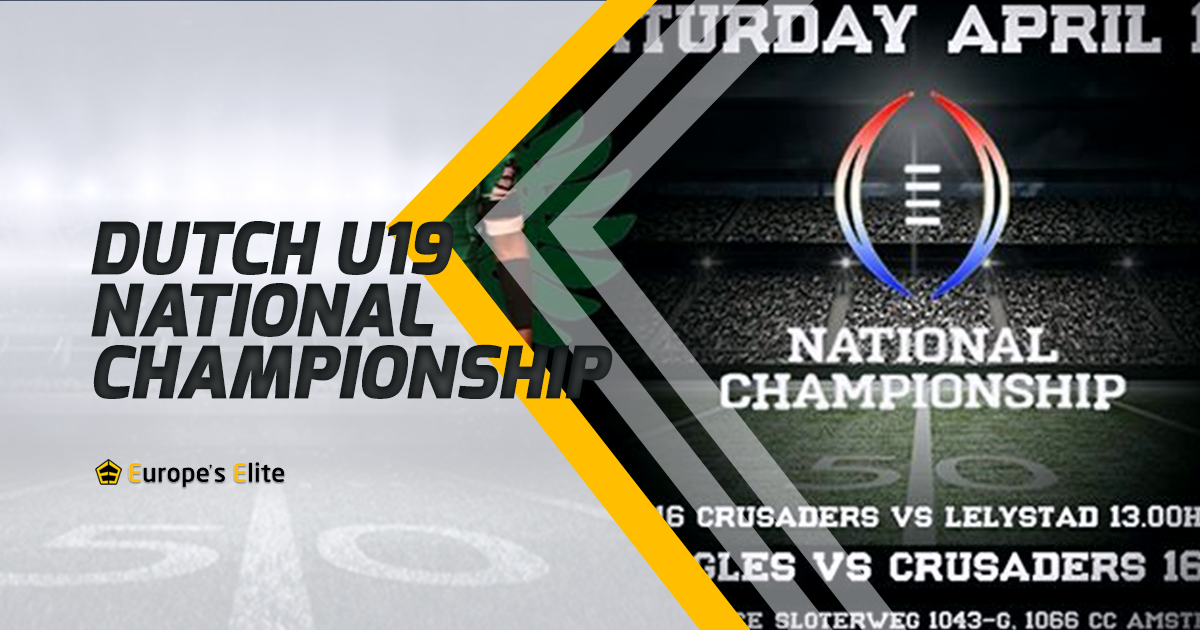 With the 2017 U19 Dutch National Championship set to take place, The Amsterdam Crusaders and the CSB Eagles are one game away from winning it all. Europe’s Elite had the opportunity to speak with both head coaches and get their assessment of this season and their thoughts heading into the championship game.

AMSTERDAM CRUSADERS
This year’s crusaders team saw the return of Head Coach Jerrel Alfarez to the sidelines. With his presence, Coach Alfarez was able to bring back stability, structure, and discipline to a team that was in need of peace in the locker room. Coach Alvarez has done a wonderful job of making sure everyone has a place on the team and understand what their job is. Another benefit of coach’s return has been the ability to work with friends.

“I personally found it very nice that I coach this team together with two of my boys, who are responsible as offense and defense coordinator” – said coach. Although the competition levels have been inconsistent during the season The Crusaders are rematch with toughest opponent: “The team we play against has unfortunately been our only serious opponent this season.” the crusaders will need to play their best game in order to win. “My opponent has a lot of athletes and flexibility on the team while also playing with a lot of strength and technique.” the tough battles of the past have created a common respect between the 2 clubs, in the previous matchup The Crusaders edged out the CSB Eagles 16-14 in a very exciting game.

With the Crusaders having home field advantage the hope it will be the extra boost they need from a team that played them so close last time. “There are many advantages. I hope eventually that it’s in our interest that we draw the longest straw. But also, that it becomes a nice finale, I’m sure off it.” Coach Alverez

CSB EAGLES
The heart breaking loss to the Crusaders in the regular season has been haunting coach CSB Sven Janssen Eagles all week. He and his staff have been tirelessly preparing so they can bring home the championship.

“My thoughts of tomorrow, well for starters I haven’t been able to sleep all week. Me and my coaches have been studying the game tapes of the crusaders all week and have come up with several ways to beat them on paper. We’ve been practicing scout offense and scout defense for the last month and I am pleased to say that our boys fully understand the opponent’s game plan and the team captains have calculated the success rate for every play from both sides. I believe that we are ready but we must not under estimate our opponent since that was the reason they beat us earlier on in the season” said coach Janssen.

Coach Janssen has a special group of kids 2 and a half years ago they did not even know what football was. Now they are competing for a championship.

The game will be played at the Crusaders home filed, kick off is set for 4pm. Good luck to both teams!