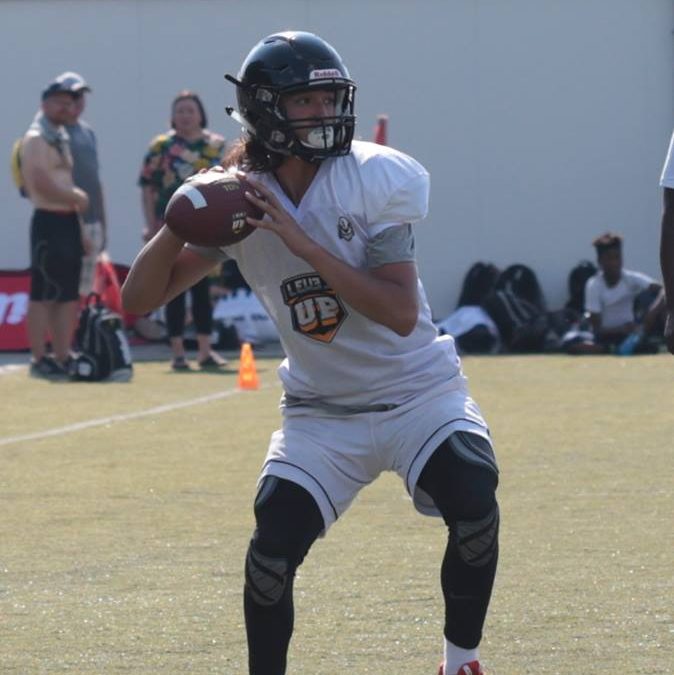 Dylan Walters is a 6’3 195 QB started playing football for  Stuttgart High School in Germany. But is now atteneding Jamestown High School in Virginia. Like many military familys Dylan has lived in several countries in his young life. At this point Dylany has spent time living in Japan, Germany, and the US. Although he was nervous about first moving to the US, it seems that this opportunity has helped his football career thrive. This past summer Dylan made a good name for himself while attending major football camps in the US. Despite the minor setback Dylan faced with his shoulder injury, he has managed to keep pushing and follow his passion. His hard work has recently got him invited to FBU’s National Championship Combine in San Antonio Texas.

While in Germany Dylan attended QB guro Emmnaul Lewis QB precision academy. Coach Lewis had this to say about Dylan,

” Dylan will be a highly recruited QB, when working with hin he showed very sound feet, has a smooth throwing motion and he has a elite arm talent for his age.  He is coachable and catches on quick to any instructions. Being a military child his discipline and leadership skills are off the charts. Dylan is a D1 QB.”

Dylan attended our 2018 Wilson Level Up Camp where he impressed LA Chargers coach Rip Scherer. Dylan was one of the top QB’s at the camp. Dylan took the time and answered the following questions for Europe’s Elite:

DW: As a player I am coachable, I’m a great teammate, and I am a good leader. I know I have a very strong and accurate arm, and I am not afraid to stand in the pocket. I also know when to take off and run if the pocket collapses. I can also throw on the run when I see an opening. I can also read defensive schemes. I also know how to pick my teammates up when they are being too hard on themselves.

DW: Not yet, but I will during my junior year.

DW: I like a lot of Quarterbacks. Deshaun Watson for his poise. Baker Mayfield for his swagger. Peyton Manning for his accuracy. Brett Favre for his strength. Trevor Lawrence for his completeness. I don’t try to play like anyone, I try to take a little from all the QBs I mentioned, and others that I didn’t, and find what works for me. I want to play my game so hopefully one day someone will find something they can take from my game and put into theirs. If you watch hard and long enough, you can learn something from just about anyone.

DW: It was just OK. I feel I did well. There is always room for improvement. I think I was hitting my stride when the season ended. The problem is that the schedule is short because of the lack of American teams. But I had fun, and I was very proud of our record and what my teammates accomplished.

DW: I will be going to a new school in Virginia – Jamestown High School in Williamsburg. I expect to take over the Varsity starting QB position, win district, and possibly even state. I also expect to keep pushing myself to become a better player, teammate, and student.

EE: How is it being a military student?

DW: That’s a very difficult question to answer because I don’t really remember going to school in America. For the past 9 and a half years I have been going to on-base schools in either Japan or Germany, so I have always been around other kids in the same situation as me. I think I have it a lot better than kids who go to school in the states because I have gotten to see so much of the world while they only get to see pictures in history books. I think the curriculum is the same, or at least I hope it is! I guess I will find out soon enough!

Check out Dylan’s most recent highlight tape below. Be sure to share this article with someone else to allow someone to be inspired by Dylan’s story. At Europe’s Elite we are all about giving athlete’s the platform that they deserve.