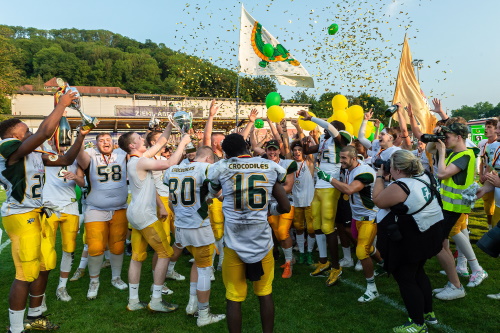 Our organization is set on a mission to share elite stories about elite athletes and elite teams every day. A few months ago, we began our “Elite Program on The Rise” series, in order to identify some of the best youth programs in every country. But the question then becomes what do we look for to identify an “Elite Program”? Of course, we must take in to account a team’s record within their league. Although a good winning percentage cannot be ignored, simple wins and losses are not the only characteristic that make a program “elite”. We like to consider several other factors such as longevity, growth, and the consistency each team presents within their country. When we first combed through Germany, we were able to identify several teams that have high quality youth programs. But only a few teams fit our definition of elite. The Cologne Crocodiles are this week’s featured team apart of our “ Elite Program on The Rise” series. It should be noted that the Crocodiles have already done the necessary work a top program in Germany over the past decade. For example, in the early 2000’s the entire Cologne Crocodiles club fell on tough times. But during this time the Crocodiles decided to rely on the development of their youth program in order to build their club back up. The Cologne Crocodiles now have the largest youth program in the state of North Rhine-Westphalia in Germany. Their large numbers definitely played a key factor in making 2019 an unforgettable season for their youth program. This season their U10, U13, U16, U19 all competed and placed first within their respected leagues. The Crocodiles primary U19 team also won this year’s Junior Bowl in the GFL-Juniors league. This making the Crocodiles U19 team the absolute best in all of Germany.

But as we stated before championships are not the only thing that defines an elite program. The Cologne Crocodiles are all about the overall development of their players and the longevity of their program. So many athletes in the central Germany area want to be a part of the Crocodiles organization that they have been forced to create a second u19 team. This team is designed to be a “prospect team” for athletes who are new to the game of football or may need more development. The club also has a “team two” for their older athletes whom may be in their 20’s but still need some development before competing in the GFL. The Crocodiles even make a strong effort to compete in international games at the youth and development level. For the last two years the Crocodiles have competed in The Netherlands and England at the youth and professional level. Not that we need to say more, but it very clear that this club has taken all the necessary steps to rise to an elite level. After winning the German Junior bowl in 2019, what’s next for the Crocodiles in 2020?

What are the future goals of the Cologne Crocodiles?

Our goals are to have one of the top youth programs In Germany and to be successful in the league with our GFL Team. In the young youth teams, we want to give the kids an understanding of football, that they have fun and develop a passion for the game as well as enhance their physical skills. In the U19 team we have the best coaches to train the players to reach the top of their league as well as lay the important groundwork for them to have the possibility to go to college or play among the top teams of the German league.– Jessica Ewald Team Manager| Director of Communications

Have the Cologne Crocodiles produced any notable talent at the NCAA or NFL level?

We have a few people in colleges like Fabian Weitz for example who plays for University at Buffalo. And last year Moubarak Djeri was signed to the practice squad of the Arizona Cardinals. And there are still several young athletes that were a part of our program in 2019 that have a possibility to compete at the college level. Hopefully we are able to continue to build up athletes so they can pursue their personal goals. – Jessica Ewald , Team Manager|Director of Communications

2019 was a very special year for the Crocodiles. Their youth program saw tons of success at every level and is continuing to grow. Their 2019 Junior Bowl victory, makes it their third championship in the last 5 years. This is serves as a prime example of a program having elite consistency. Next year the Cologne Crocodiles will be celebrating their 40th anniversary of the clubs founding in 1980. With that being said the club hopes to make their 2020 season even better than 2019. Right now, the club is in the heat of their have off-season and are forming their rosters. The Crocodiles are also in the process of creating a challenging 2020 schedule for each of their youth teams. But even with a more challenging schedule, the Crocodiles are confident about defending their championship titles. The Cologne Crocodiles have can surly be recognized for having some of the best teams and best overall youth program in all of Germany. Now it is time to recognize the Cologne Crocodiles youth program as one of the most elite in all of Europe.