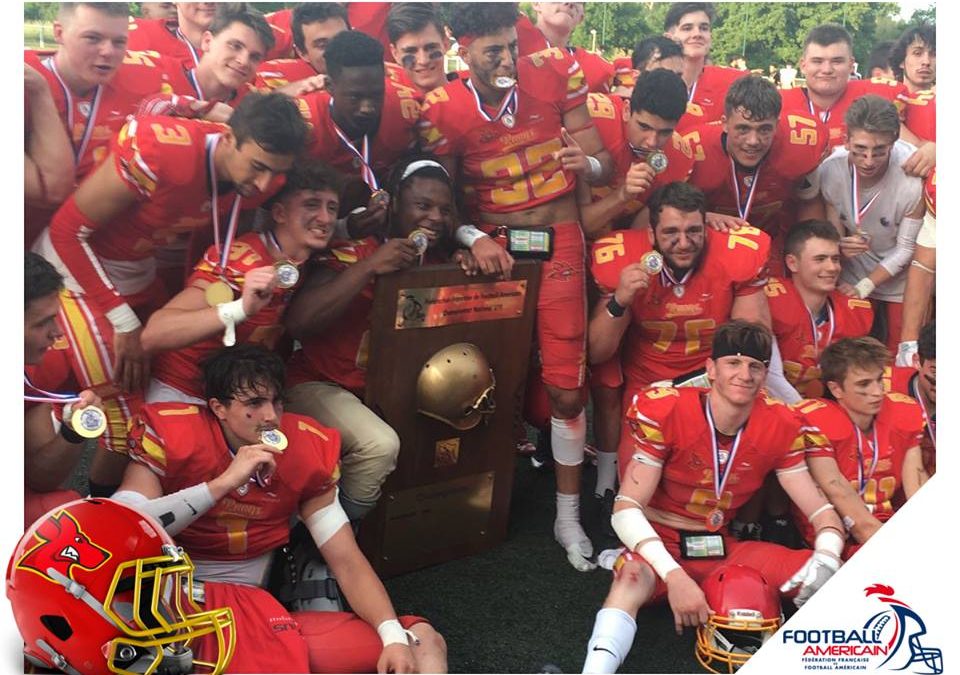 In what proved to be an incredible culmination of the French season, the Pessac Kangourous redeemed their disheartening 2017 final loss by overcoming the La Courneuve Flash 20-15 in a thrilling final.

The Kangs came into this game with confidence, but also some degree of trepidation after falling at the last hurdle the previous season. The team expected to lean heavily on its run game, and stuck to this philosophy, pounding the rock all day to try and wear down the Flash’s defence. This strategy eventually paid off, with Mathias Aillerie getting in for the score.

The Flash defence, which earned a fierce reputation as one of Europe’s elite units after conceding a mere three touchdowns over the rest of the season, proved exceptionally difficult to overcome, however. Indeed, Kangs Coach Lippens described the Flash defence as one of their greatest tests this season, due to their intense physicality, with Safeties Elijah Cramaix and Youness Benhaouar setting the tone. Meanwhile Flash’s Coach Mwamba complimented his side for maintaining a ‘bend don’t break’ mentality throughout, and limiting the Kangourous to a single offensive touchdown and two further field goals.

Indeed, it was not in fact the Pessac’s offence which caused the final difference. As they say, big players make big plays in big games, and up stepped Macéo Beard. A pre-game man to watch, according to Coach Lippens, Beard not only contributed in his natural role as a DB, accumulating 5 solo tackles, but also as step-in QB and crucially on special teams. With a punt blocked already in the game, Beard showed great speed to capitalise on a blocked field goal and return it 70-yards for the game sealing score. With this stellar performance, Beard earned the game MVP, and incredible honour for the young player with a year of eligibility remaining!

Congratulations to the Kangourous for their stellar victory and for sealing the championship! We are certain they will push on and continue to excel for many years with a young squad and a talented coaching staff. The Flash, meanwhile, will look to rebound and make a strong push for the title in 2019!