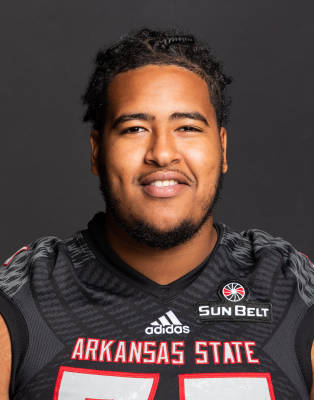 Nour-Eddine Seidnaly is 6’5ft and 325lbs Red-Shirt Senior offensive lineman at Arkansas State University. Although his good size and stature on the field grabs enough attention, Seidnaly’s journey to the NCAA level is quite interesting. Seidnaly grew up in the city of Clichy, France and first got into football at the age of 13. He simply got into the game of football by playing video games. Now for some readers this may be surprising that a video game can lead a young person to play this physical sport. But those of us whom have experienced playing Madden or NCAA football games on a Play Station, we understand how addicting/influential these games can be. Luckily Seidnaly’s Play Station did not take up too much of his attention, as it eventually led him to join the Les Molose Dasnier football team in France.

As we mentioned before Seidnaly’s journey to the NCAA is very interesting. Although Seidnaly is originally from France, at one point during his high school years he and his family moved to the US. Seidnaly then continued his football and High School career in Silver Springs Maryland. While attending Bethesda-Chevy Chase High School in Silver Springs, Maryland ,Seidnaly actually competed as a defensive lineman. But after graduating from High School in 2015 he decided to attend ASA College (JuCo) for two years in Brooklyn, New York. It was not until his time at ASA College where Seidnaly’s recruiting process started to blossom.

Towards the end of his career at ASA he began to gain the attention of major websites and numerous university scouts. Rivals.com and 247Sports.com both had him ranked as a 2-star recruit and as nation’s No. 29 junior college offensive tackle. Just a small list of schools that began to recruit him included Maryland, Texas Tech, UCLA, Southern Miss, Texas State, Nevada, and East Carolina. Eventually, his first scholarship offer came from Eastern Kentucky University, but in the end, Arkansas State had won him over.

“ For me the recruiting process with Arkansas State was great they got me to commit early after only 2 official visits. They knew how to talk to my family and did a good job recruiting me. The environment here at State allowed me to focus on getting better. And the way they were treating me and talking to me just like family made me feel like at home. I always believed I could be a D1 football player, during the recruiting process I just had to trust the process and stay focused.”

Although Nour-Eddine is a member of the Arkansas State Red Wolf on the field, Seidnaly never forgets his French roots. France has proven to be a hot bed for talent over the past few years. Seidnaly suggest that there are tons of football players in France that could compete at the D1 level. And quite frankly we have to agree, France is one country that is loaded with football talent at every position. That is one reason why we are excited to be hosting several events in France on 2020, including our 5-day Level Up camp.

Lastly, Seidnaly wanted us to leave you with this message.
“ Nothing comes easy in life but hard work do pays off!!! And if you believe in it you can achieve it!! My story has been filled with ups and downs and I’m am going to give my all my in my last season next season to make sure I need to be where I need to be in the future” .

Europe’s Elite is the best news source covering rising athletes from and within Europe. Be sure to follow Noureddine on social media to keep up with his athletic career. ELITE ATHLETES. ELITE TEAMS. ELITE STORIES.