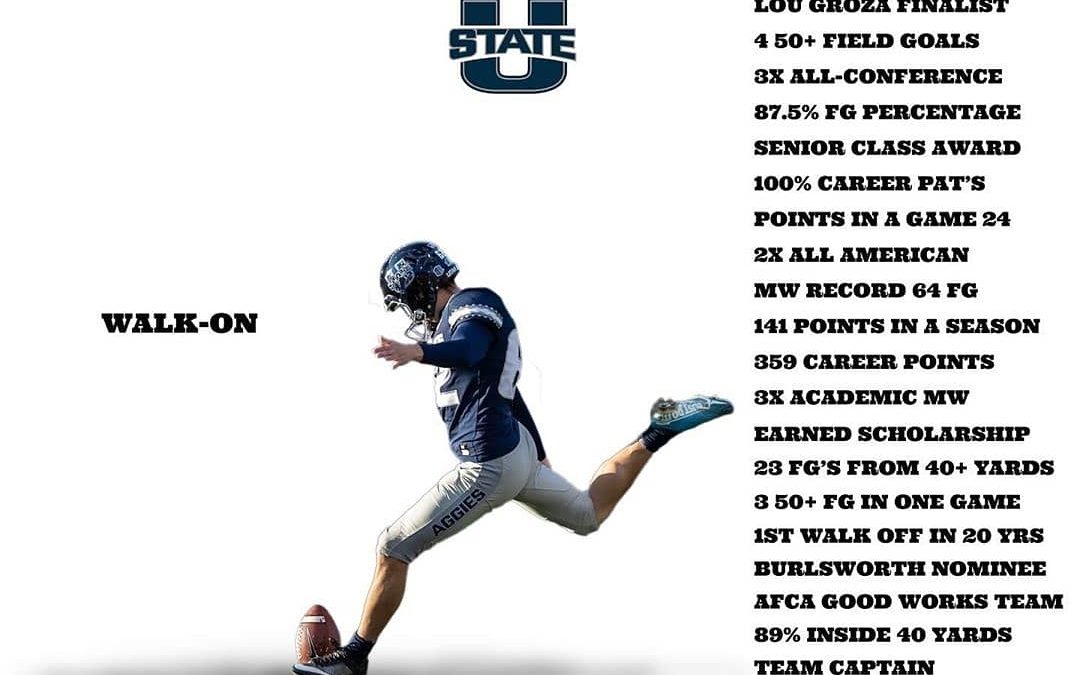 Growing up Dominik Eberle knew he could kick a soccer ball far with ease, but he also knew kicking a football was a completely different challenge. Nonetheless, this challenge to kick a small oval pigskin covered ball peaked Dominik’s inital interest enough to play American Football. Like many young athletes here in Europe, Dominik Eberle grew up playing the game of soccer. But the game of soccer ultimately did not win his heart. Now this small town kid from southern Germany, is a history maker for the Utah State football team and has made a name for himself to potentially get drafted by a NFL team in April.

For the past few years Dominik Eberle has been the starting Kicker for the Utah State Aggie football team. He originally grew up in Nuremberg, Germany before moving to the state of California as a young teenager. Although a soccer ball was the first ball to touch his golden foot. It was after moving to the US that he first discovered his skill and passion to play American football. That small interest in football as a young teenager lead Eberle to become one of college football’s best kickers in NCAA history. Eberle has tied the NCAA record for third most field goals made in a football game , scoring 24 points. He has also set a total of eight school records at Utah State, including scoring a record of 359 points. Dominik also holds a total of seven conference records in the Mountain West football conference. Dominik’s dream of playing college football did not stop by simply making a roster. He will now graduate from Utah State as a school, conference and NCAA record holder.

Needless to say, all of Dominik’s record-setting career and hard work have not gone unnoticed. During his time at Utah State Dominik has earned several All-Conference and All- American Awards. Dominik has also been recognized as a Lou Groza Award finalist several times, which is granted to the top NCAA placekicker every year. This past season Dominik also found himself on ProFootballFocus Honorable Mention All-American list and NFL draft boards. Now as the NFL combine has come to a close, and pro prospects wrap up their final workouts, Dominik waits to see what the future holds. From small-town Germany to southern California, then Utah State, and next stop NFL. Dominik is living the life that many Euro athletes only dream of.

Check out Dominik’s highlight tape below: