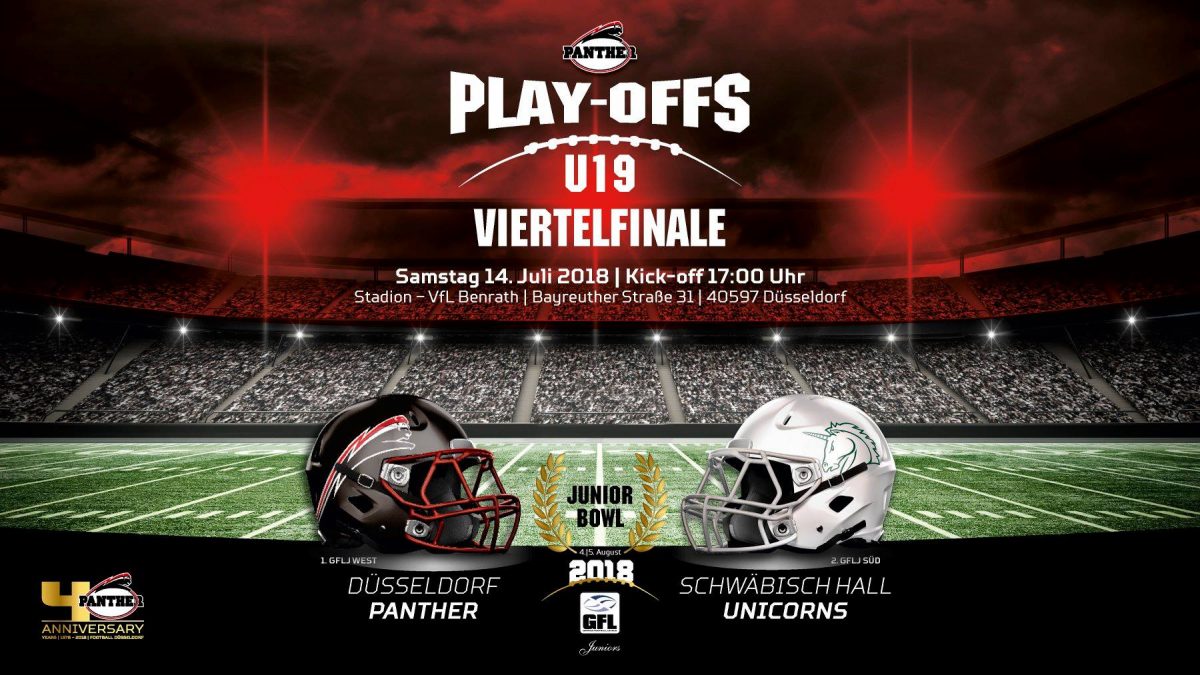 This weekend marks the start of the GFL Junior postseason, which will see talent from across Europe’s top league square off to decide who will be crowned champions. In perhaps the most hotly anticipated matchup, last year’s runners-up, the Dusseldorf Panthers, play the ever excellent Schwäbisch Hall Unicorns, in a high powered matchup.

The Panthers have had an impeccable season, remaining undefeated in arguably the GFL’s toughest division, the GFLJ West. To reach such an impressive goal required overcoming last year’s national champions, the Paderborn Dolphins, and upstarts, the Cologne Crocodiles. Their offence has performed well, pulling them back into every game, despite several slow starts where the team were down early.

It is really the defence that is the jewel of the Panthers’ crown though. With a nation-leading 8.5 points per game conceded, the Unicorns are bound to have a tough time overcoming them. Running a 4-3 front, the Panthers are adept at getting in the faces opposing offences, pressuring their pass game and stuffing their runs. Of particular note is DT Joseph Appiah Darkwa, who utilises a quick first step and his impressive physical size (6’5, 250lbs) to dominate opposing offensive lines. Aiding in this is their impressive secondary, who buy time for the defensive line to break through, especially Harlan Kwofie, who’s blend of speed and physicality at the line of scrimmage has led to HC Allan Verbraeken labelling him ‘the best cover corner in the country’.

The Unicorns are not without talent of their own, however. A team more predicated on speed than size, the Schwäbisch Hall outfit will hope to knife their way through this strong Panthers’ defence. Quarterback Louis Waldmann holds the Unicorns hope’s in his hands, though there are very few GFLJ players who are more prepared to take on such responsibility. Waldmann has expertly led his team this year, dicing up oppositions through the air and adding a substantial threat with his legs also. This dual threat has led the Unicorns to lead the nation in points per game scored, with 36.4.

There seems to be a situation in which an unstoppable force will meet an immovable object, and it will be fascinating to see which side relents come gameday! Each side has class and pedigree going into this one, and so it is too close to call!