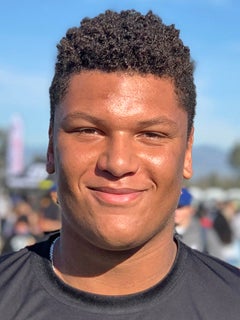 Defensive Lineman Hero Kanu has been one of the biggest names in college football recruiting this year. The young Bavarian giant from small town Geltendorf, Germany , recently moved to California to participate in this years special high school football season. Since his time playing at Santa Margarita Catholic High School , Kanu has earned 16 division 1 offers.

At 6-5, 290 pounds, he’s a big interior lineman with plus quickness and explosive athleticism. He’s naturally strong, shows a great get-off and has a rare combination of size, speed, power and quick twitch ability. He also has the motor that every coach dreams of having on their DL.  Hero is definitely a generational talent.

Hero is currently the top ranked athlete on our 2022 ranking board and rated as a 4- star athlete. As a ” Four-star” prospect we are stating that Hero is one of the top prospects in his recruiting class, potential immediate impact player for a college football team, and an All-Star game candidate.