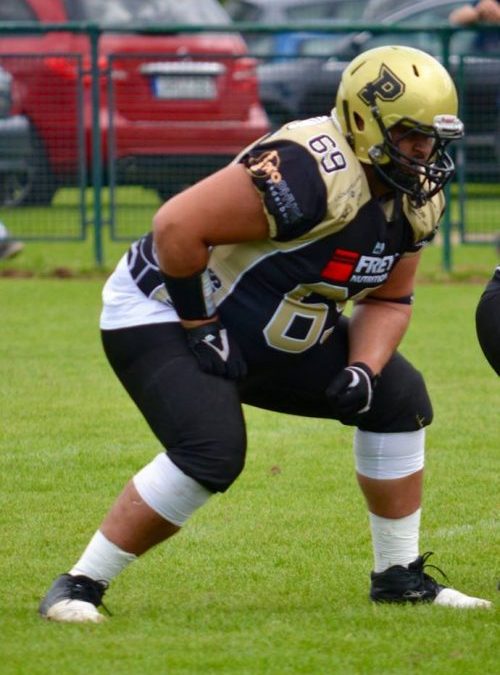 Kariem Al Soufi has been playing football since 2011 and has become one of the best international offensive lineman recruits for 2019. Soufi help lead his team the Paderborn Dolphins to the German U19 championship in 2017 and plans repeat in 2018.  Soufi credits much of his success to his head coach Peter Daletzki and Offensive Line coach Andrew Richardson. “Coach Daletzki has continued to push me every day in practice and coach Richardson has helped to improve my OL skills and strength in the weight room.”

Kariem: I am a team player who tries to motivate the team and does what ever it takes to win. It is very important to have a good relationship between my teammates and  coaches.

EE: Who is your favorite player?

Kariem: My favorite NFL Player is Tyron Smith because I like the way he plays. He also has
a good relationship between his teammates like Elliot and Prescott which I believe is very important to achieve success.

EE: What is your favorite thing about playing football?

Kariem:It was really an amazing feeling to know you are the best team in Germany.  It was also really emotionally for all of us because it was the first time in the history of the Paderborn Dolphins winning a championship

Kariem: Our goal for this season is to reach the playoffs step by step and then the Juniorbowl . I think we will try to balance the pass and run game in the offense. We will be prepared for every opponent and watch a lot of film to analyse the different teams.

Check out Kariems Highlights below: