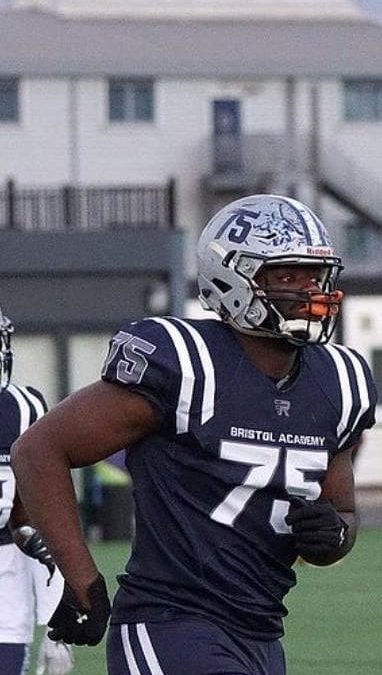 Michael Kimpiabi is a 6’6 285 DL who was born in Democratic Republic of Congo and moved to Switzerland with his mother when he was 3 years old. Although he only started playing football at the age of 17 he has honed his skills to become a dominate pass rusher that loves the game.

“I was with my friends and I noticed one of them had a football and we started throwing it around and I enjoyed it. He told me where he was playing and said I should come by if I’m interested in playing. After the first practice I knew I wanted to play the game for a living, so I started to train harder towards it. Now I am working hard at the Bristol Academy to further develop my skills to hopefully receive a college scholarship” said Kimpiabi.

This past season Kimpiabi played for the Bristol Academy, where he has excelled and become a “Hell of a 3tech” according to his head coach Benjamin Herod.

Although Kimpiabi has excelled at Bristol is was not an easy road to get there. After his 2017 season in Switzerland Kimpiabi was not able to accept Jr. College scholarships offers due to the difference of schools grading systems between Switzerland and the U.S. Even when it looked like he was running out of options to continue his journey to the U.S. Michael never gave up.

“My friends were always supportive and I really felt that I could do it when Coach Evan Harrington said that I have potential. So we searched for every opportunity to get to the states and that’s when I enrolled in Bristol. To play this season at Bristol I had to work hard and really decided if I want to continue to chase my dream.  I had to work two jobs to pay rent for the house I lived in this year. I will not quit on my dream to play at the highest level. This is the path I choose and I will stick to it until the end” said Kimpiabi.

Kimpiabi is a physically gifted athlete, who plays with a mean streak. Although he hasn’t been playing football long, his effort, attitude and willingness to get better is what separates him from others. Kimpiabi is currently receiving interest from Temple and Kansas.

Check out Kimpiabi’s highlights below