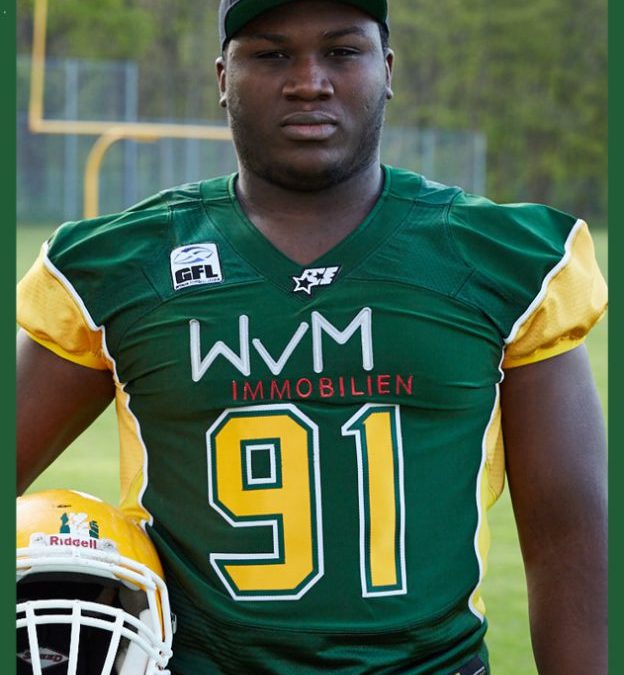 Acoording to the Cologne Crocodiles Defensive End Aboul Moubrark Djeri has been invited to the Arizona Cardinals tryouts.

” The managers of the Cologne Crocodiles reached a big surprise last Friday. Defensive end Abdoul Moubarak Djeri, called by everyone but Mouby, was invited to a formal try-out by the Arizona Cardinals.

The Togo-born, 1.91 m tall and 121 kg heavy model athlete is a homegrown Crocodiles, he played for two years in the successful U19 program Crocodiles, in both years he reached the junior bowl and was once German Junior Champion. He then joined the GFL team, where he was instrumental in advancing to the GFL and then to the first successful 2017 GFL season.

The outstanding contacts of David Odenthal, Offense Coordinator of the Crocodiles and graduate of the University of Toledo into the NFL were crucial. The general manager of the NFL team from the desert state has been a good friend since college days. ” We sent a lot of video and telephoned several times, the physical conditions, but also the get-off, the scouts have fallen over there. Such a chance does not come every day, we are very happy that the boy has the opportunity to show himself, “said David Odenthal in a first reaction.

” The way into the squad of the NFL team is still long, but the first step is done. It’s great that our junior program bears such fruit, Mouby is a very fast and dynamic player, such guys do not run around every corner in the States, “says his mentor and head coach Patrick Köpper.

” I have always hoped for such a chance, I will give everything and try to present myself from my very best side. I’m really looking forward to this adventure and hope that I get the opportunity to train and work there after the tryout. ”

Mouby learned his first football moves from Claus Biedermann, who took charge of the U19 athlete and gave him the technique that still distinguishes Mouby: ” I’ve never seen a player with such physical power. If Mouby can channel this power through technique and game understanding, there is a considerable career ahead of him. ”

Moubarak Djeri will travel to Arizona at the end of March, the Crocodiles Family wishes him a successful time in the NFL”.

To read original article by the Cologne Crocodiles click here.