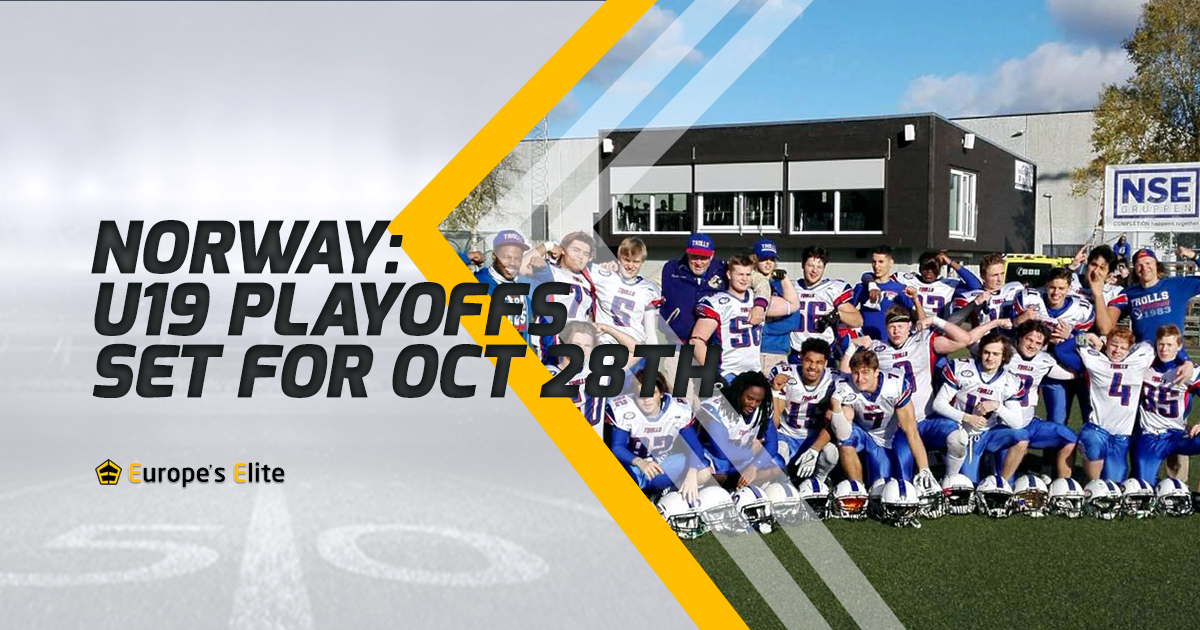 As the 2017 U19 Norwegian season comes to an end, the playoffs are set to begin October 28th 2017. With the top 4 teams ready to begin their postseason hopes of a 2017 Norwegian U19 Championship. The stage is set with the Vålerenga Trolls at 6-0 in first place, Eidsvoll 1814’s at 5-1 in second, BVHIF Ironmen at 4-2 in third, and finally the Lura Bulls at 3-3 in fourth place. The first playoff games will feature the Trolls against the Bulls at home and the 1814’s will host the Ironmen in Eidsvoll.

A look back at the last game of the regular season of the Eidsvoll 1814’s against the Lura Bulls. It was a cloudy day in Stavanger Norway on October 14th as the !814’s prepared themselves for their final game of the 2017 season. They knew it was a must win to guarantee the home field advantage in the playoffs. They were lead by the great quarterbacking of Raymond Myhrer who was 8 of 16 with 178 yards passing and 4 TD’s as well as 79 yards rushing and a pick 6 on defense. As well as the hard running on RB Jonas Hauge who had 8 rushes for 142 yards and 6 rushing TD’s, as well as a fumble recovery returned for a TD.

Other notable players were WR Espen Waagen with 4 catches for 104 yards and 2 TD’s and 1 rush of 47 yards and Fredrik Brenna, Elias Aune, Derim Bjupi all accounting for one TD each. The game was finished with a score of 35-89 and the Eidsvoll 1814’s securing the second place spot in the league.

With the playoffs start just a week away, the 4 teams are getting ready to secure their spot in the 2017 Norwegian Championship to be held in Hamar Norway at the Briskeby Arena on November 4th. Its an exciting time for Norwegian football in Norway!