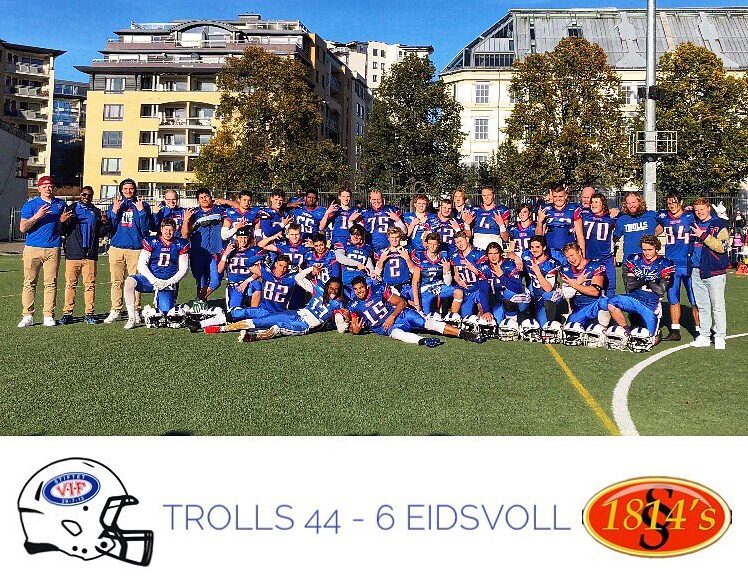 This weekend the 3-0 Vålerenga Trolls faced off against the 3-1 Eidsvoll 1814s in a matchup that would decide their respective seedings in the playoffs. Whilst we anticipated it would be a tight affair, the Trolls had different ideas, sweeping through the 1814s defence on route to a 44-6 victory!

There was a degree of concern in the Vålerenga camp in the build-up to this game following their four week break from competitive football. With the 1814s playing the week before, Trolls coaches wanted to ensure that they got off to a fast start and weren’t caught unawares. This coaching philosophy worked exceptionally well, and the Trolls were able to dominate in all three phases of the game. Their offensive performance was typified by explosiveness, both with their runs on the ground and their game-breaking receiver play. Lead tailback Storm Blomquist had 3 rushing TDs, behind immense offensive line performance that Head Coach Le’Von Warr praised in glowing terms. Meanwhile QB Lars Nilsen showed off his arm talent with three long touchdown passes – two to Mads Hilton and one to Jacob Ribert.

On defence, meanwhile, the Trolls played lights out. Eidsvoll have had a very strong season on offence overall, averaging 28 points per game led by QB Raymond Myhrer. However, this match they were unable to even get started, with the Trolls defence winning at all three levels. In fact, the Trolls have not conceded more than one touchdown in any of their games this year – the only team able to boast such a feat!

With that, the 1814s’ season draws to a close, on an understandably disappointing 3-2 record. The Trolls, meanwhile, power on to the finale, facing the also undefeated Oslo Vikings in what is shaping up to be a phenomenal contest!