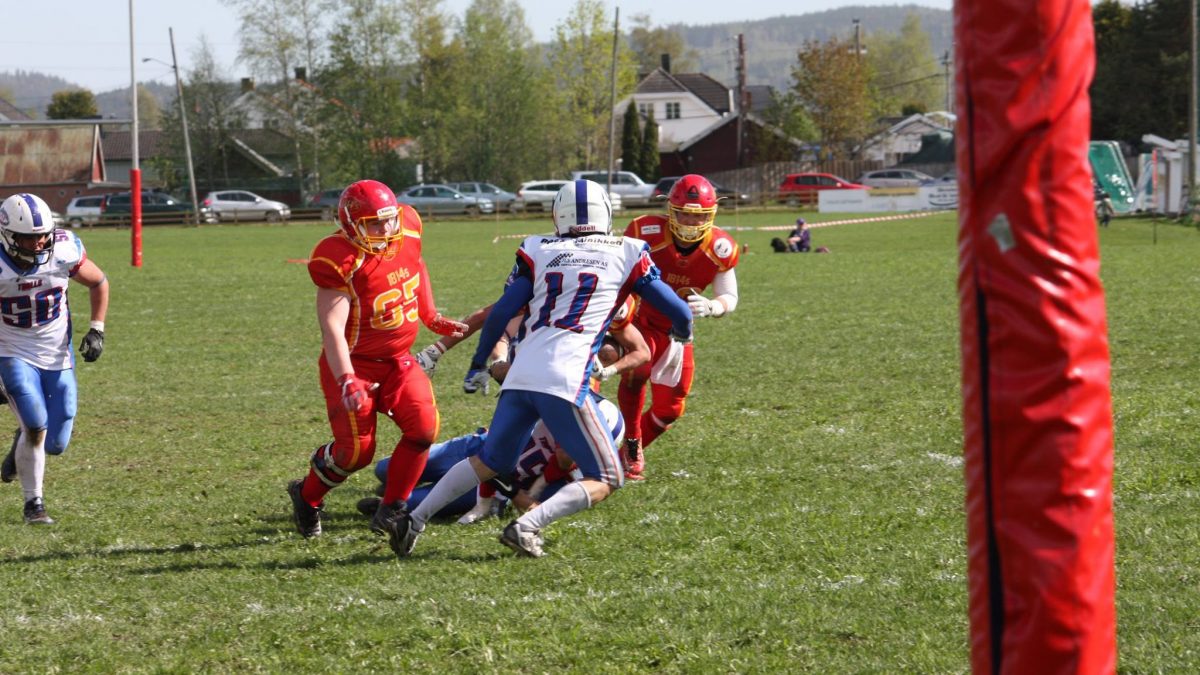 This weekend the Vålerenga Trolls faced off against the Eidsvoll 1814s in a hotly anticipated rematch, which would decide who would have a chance at the national title. The first match between the two teams was surprisingly one-sided, with the Trolls winning 44-6. Eidsvoll looked to rectify this, fighting tooth and nail to turn around the result. However, it was not to be, with the Trolls ultimately completing the double over their opponents, though by a much tenser 19-12 scoreline.

Vålerenga had injury struggles coming into this game, and were without starting QB Lars Nilsen following a concussion at the Nordic Championships. Head Coach Le’Vonn Warr therefore decided to start Edy Dos Santos for his first ever game at the position. This move clearly paid off, as he ably led the offence, and showed off explosive potential with a 70-yard rushing touchdown on his first play from scrimmage. Meanwhile, on defence, leader Håkon Søderlind put on a monster performance from Defensive end, despite being hobbled by a hamstring strain.

Meanwhile, the 1814s pulled off a significantly more impressive showing than their first match against the Trolls, particularly in limiting the Trolls. Simen Bråten led his team in tackles, going a long way towards shutting down the Vålerenga run game. Jonathon Olsen also made a strong case for team MVP, picking of Dos Santos twice to give his an opportunity to win the day. Unfortunately, it all came down to the final play, and a barely missed catch, to seal the 1814s fate.

With this, Eidsvoll’s season is over. They will undoubtedly be looking to rebuild after this disappointing loss, and a lacklustre 3-3 season, but have the coaching staff and a core of players to make this possible! Meanwhile, the Trolls will move on to the National Final and face off against the one team that defeated them this year: the Oslo Vikings. Undoubtedly they will be looking to improve upon their first game, and fight to defend their title!