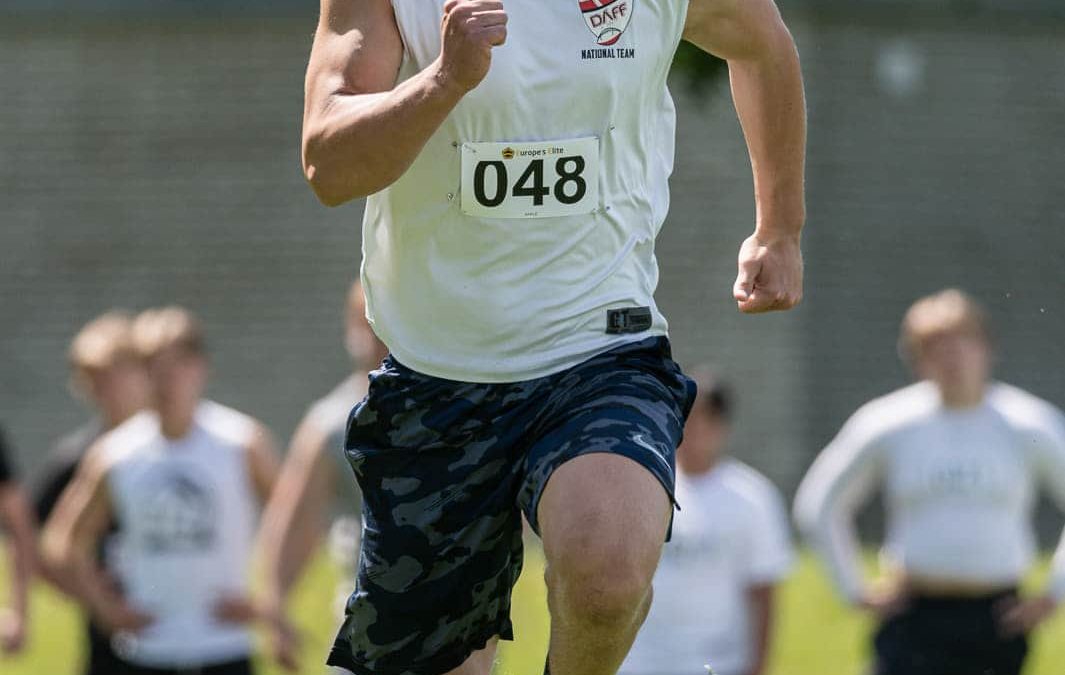 Photos By: 1st Down Photograpy
Written By : Matt Bressington of Europe’s Elite

After a long few months, Covid-19 is slowly being managed by the great people across the world. In the wake of fewer restrictions and more flexibility, Europe’s Elite opened with a flurry of camps throughout Europe, giving those who have put in the work during the toughest of times a chance to showcase their abilities. Many “Top 150” athletes displayed why they’re considered as some of the continents best young talent, one such of these players is Julius Bunk Hansen. The lengthy Danish wide receiver for the BGI Wolves made a definite impression on those in attendance in Denmark with a lethal combination of size and crisp routes.

Starting from the bottom and working our way up, Julius footwork is remarkably interesting because of his naturally great size. Standing at 6’2 195LBs he certainly has NCAA capabilities; he has a rather broad initial step of the release that allows him to get outside or inside the corner. In turn, using his explosiveness to get a yard or two of separation. Finding space has become a highly touted quality in his game, during an international game against France he was exploiting holes in the defence and taking big yardage on one of the best units and best DBs in Europe. I would pay good money to see a 1V1 matchup between certain Corners because Julius should be considered one of the elites in his class. Certain intangibles separate him from the competition, sharp reactions coupled with concentration regardless of contact makes it a nightmare to game plan for. Not to mention the ability to locate the ball even if it is under/overthrown, his catch radius is phenomenal, and he often comes down with the ball in traffic. Aggressive in getting the ball. Aggressive with the ball in his hands.

After delving into the older film to see how Julius has developed, it’s easy to say that his trajectory to the level he’s at now has been very drastic. Considering he is still only 17 his athleticism has shone through in recent years, weighing 208 with 16 reps on 225LBs and a 4.62 40-yard. He’s not just relying on purely being bigger though, having defined his hand position while following through with the ball after coming down from a contested catch. It’s reasonable to say that his knowledge of the game has spiked, he understands that DBs can’t stand with him when he uses his outstanding reach and strength to bully smaller players whether it’s on the outside or in the slot. The slot is certainly a point of interest, with Denmark using a system that utilises motions it has given Julius the miss matches, allowing him to apply the dagger himself to opposing defences.

Overall, throughout watching and breaking down the film it’s safe to say I’m on the Julius bandwagon. He has a rare talent and I do not doubt that he is already a player who will continue to rise through the ranks of the top 150, furthering into more opportunities for the young Dane. Possibly in the NCAA or as an important weapon on a championship team. With a particular focus on his mental and physical health this offseason, I advise teams to keep an eye on him otherwise you may have to play him someday.