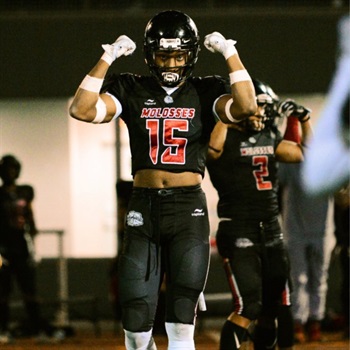 The turnover battle is critical in winning football games. Having a top Safety in Europe also adds to the ability to win. The French American football team knows both of these and has produced Kevin Fortes. Who has combined both of the factors into a diverse, versatile playmaker who been a proven star in Europe. In an incredible France team armed to the teeth with D1 talent, Kevin was a sparkplug for their U19 Championship, as well as league titles in his country. Kevin may just be, the future for a star era of French football.

Getting started, the first thing that is evident is Kevin’s D1 size. Standing at 6’3 193 lbs he is a long, athletic safety who uses his physical abilities to travel the field. Experiencing time in Nickle, Corner and Kick return but most importantly, Safety. This is important because of Kevin’s explosiveness and power that has translated to the international stage and into the French leagues where he has proved himself to be a rising star. He has demonstrated that he can do anything asked of a safety, Blitz, Force fumbles, score touchdown and grab interceptions. It is a sight to behold from a player who has not yet reached his prime, but when he does the best teams in Europe will be calling.

One of the biggest factors in Kevin’s steady rise through the ranks is his playmaking. His ability to turn the ball over for his team is imposing, but the scoring is what turns it from great, to excellent. For example, when he came against the Cougars, he recorded forced fumbles on three occasions and scored a pick-six. As well as a pick-six on the Flash plus a fumble recovered for a Touchdown. Fumbled forced and recovered on Czech Republic, a fourth-quarter red-zone interception vs Spartiates returned 43-yards. It’s safe to say when it comes to big plays, he is certainly the man you look for to change the game. Secondly, the unorthodox playstyle is extremely hard to read for offenses, he drops back into coverage but is also a head hunter. Making several big hits in key moments. Resulting in a dynamic, box playing, ball-hawking talent. Lastly, for a young player who is still progressing, he has elite reflexes. Great hand speed and a defensive IQ who reads routes and Quarterback tendencies with scary accuracy, often disrupting the play right from the snap.

To conclude, Kevin has D1 talent written all over him. He has a long athletic frame and a clear elite talent on defence. His game translates well to the D1 scene with a similar style to Keanu Neal of the Atlanta Falcons. Hard hitting play makers are a rare breed but he combines this with good IQ and technical fundamentals. Defensive touchdowns are a quality that will win games and generate interest from high level programs. When he hits his prime, I believe he can make it to the states or compete in a championship level France team capable of winning many European titles in the process.

Europe’s Elite is the best source covering rising athletes from and throughout Europe. Check out Kevin’s highlight tape to be a witness to his talent.