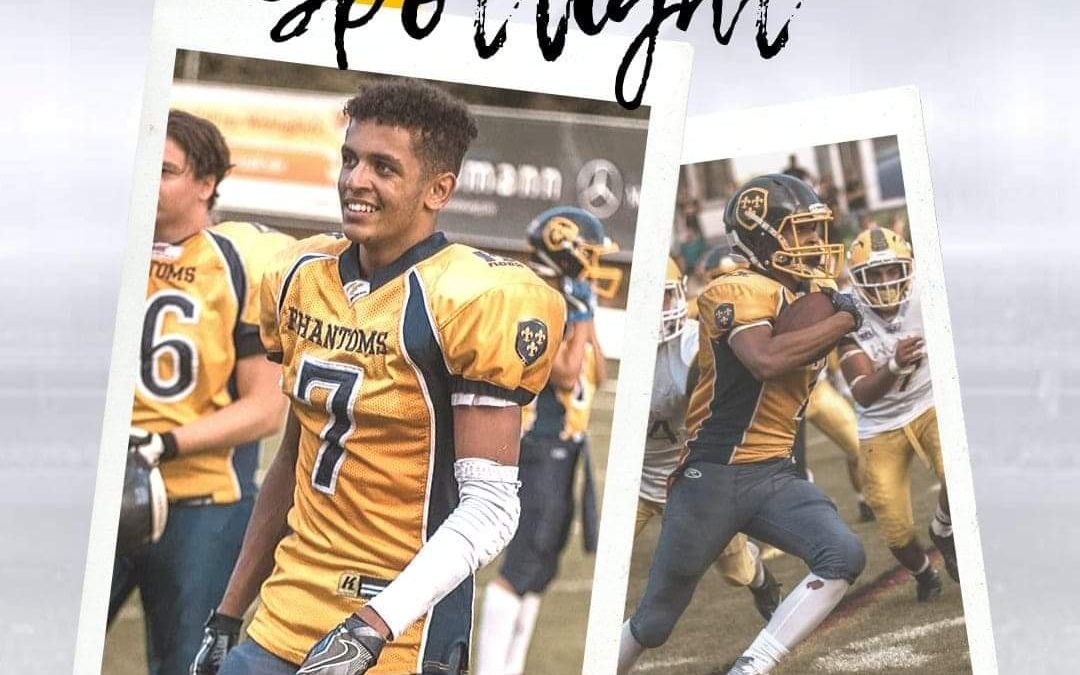 There is certainly something in the water in Wiesbaden, in particular the running backs are breaking out into stars of the GFL and beyond. However, Europe Elite’s newest commodity has been under the radar for some time, totalling nearly a decade of experience in the German leagues, starting at 10 years old in flag before transitioning to tackle football at the age of 11. Maurice Baker is a potential hidden gem for the Phantoms, a team quickly gaining a reputation for developing talent worthy of NCAA attention. In 2017 Maurice made his state team as a rookie, then continuing to earn MVP in his last JV season and the Europe’s Elite camp in Vienna in 2018. The accolades do not stop there though, during his first year of Varsity football he received “Rookie of the year”, later being invited to the German national team try-outs. Progressing into the next round before the process being delayed by current world events. Evidently, we are dealing with a player who is currently on fire and is looking to explode in the coming years.

Maurice is certainly a talented athlete, showcasing hurdles and a signature stiff arm that have made decent runs into highlight reel material. However, this isn’t the only aspects to his game that he uses to make defenders look foolish, the ball carrying vision is special to say the least, various times in the film he will pause and calculate the best way through traffic, dip his hips and burst through the open holes. Focusing more on his stiff arm, its clear he has a natural eye for distance management, always knowing when to shoot the arm out, therefore avoiding being caught up in a tackle. It shows a similarity to a Devonte Freeman technique. Continuing down the film, he executes impressive footwork in both lateral quickness and breakaway speed, rarely if ever being caught from behind. Simply put, if he’s gone, he’s gone. His smooth run style is also eerily similar to Freeman, his ability to speed up and stop, then go back to full speed is something to marvel at. This is due to a low centre of gravity combined with his ability to play outside the box, bursting around the corners with explosive power.

Its clear to see that Maurice has what it takes to play stateside, he still has high school eligibility but could also go to a D3 or push for D2 with his current playing situation. He has the fundamentals on lock and can switch his style easily, often on back to back runs. This keeps opposition guessing, one play he rips a long run and on the same drive he can run it in on the goal line by hurdling line backers. Truly a talent that is catching light in Germany, and there is no doubt that he will have a breakout year wherever he chooses to play during 2020. He has the experience that is hard to find in the European game, because of this I think that the coach that gives him his chance is going to reap the rewards of the hidden gem that is Maurice Baker.

Check out Maurice’s most recent highlight tape with the link below!