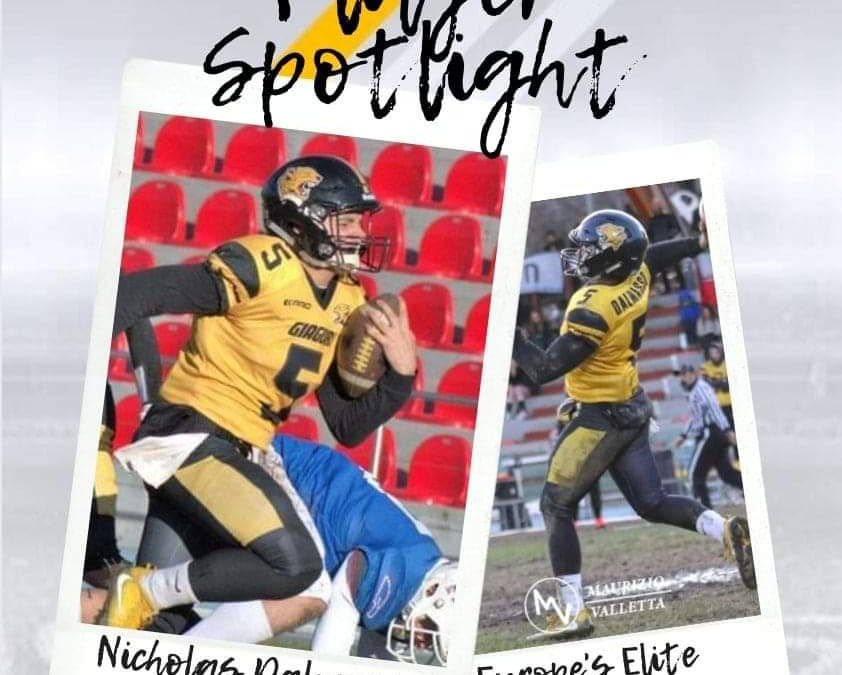 In 2020 the mobile Quarterback is arguably the most sought-after position in football, it requires calmness and deadly accuracy paired with the ability to make the play outside the pocket. Nicholas Dalmasso possesses these qualities and more, during the study I was utterly amazed by his abilities to take the top off the defence and ruin defensive adjustments. The Italian playmaker has been playing since 2013 for Giaguari Torino so this has given him plenty of experience in a competitive league, featuring other elite Euro talents. However, he has made them all look amateur with great feet, a sense of evading pressure and a pump fake that gave me motion sickness during the film.

Nicholas is unorthodox in the best ways; he isn’t the check down type mobile Quarterback. Many times, throughout the film he will avoid pressure while maintaining his focus downfield, then unleash a beautiful touch pass for a 40-50-yard gain, on the reverse he is more than happy to run the read-option or tuck the ball if he has space. His finesse doesn’t stop there, his quick throwing motion has been a consistent tool for him and has allowed him to hit his Wideouts on quick slants and imposing his ability to get the ball only where his players can get it. This is an uncommon ability for a young player like Nicholas, to have to accuracy to dart an out-route for a 15 yard gain the follow it up by rainbowing a gorgeous fade against the Cover 3. He has the extensive football knowledge and plays accordingly, moving the chains and extending the drive by any means necessary, even if he must take some contact on his way to do so. I cannot understate how valuable the experience has been for his style, the fact he isn’t flustered by linemen, he doesn’t tuck and run at the first sign of adversity and he is a pass-first player. He will find the open man instead of trying to force his reads, this is a clear show of study when he gets into his flow and starts picking teams apart.

The talent and natural capabilities are certainly present, it’s evident after the first viewing of his film and its clear that he could compete at an NCAA level. He is undersized at 5’9 183lbs but there is some serious competitive nature in this young man, all he needs is a D2 level school to take a chance and they’ll have themselves a serious offensive threat on their team. We at Europe’s Elite look forward to seeing how far he can go, with how polished and defined his game is at such a young age the sky is the limit for his potential. I certainly wouldn’t want to try and scheme for him on game day.