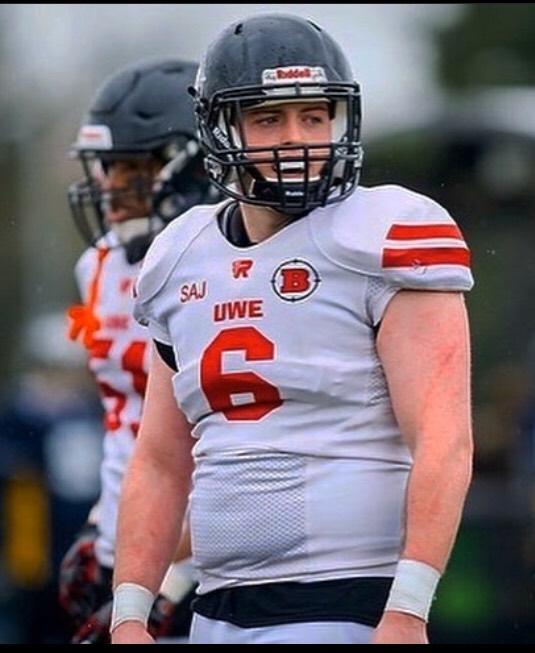 Every team needs that spark plug, that player that forces and expects teammates to play to their abilities. During my own playing experiences, I have come across many types of these exceptional players. However, none have ever brought the relentless intensity and mental toughness of a certain Inside Linebacker from the Bristol Bullets. While attending a recent game between 6-1 Bristol Bullets and 7-0 Birmingham Lions, I was reminded of Leon Klosowicz’s trademark ferocity. Calling me out during half time while holding a 16-7 lead because of an incorrect prediction, a 46-14 win to claim the South Division title was the overall result. Only giving up one touchdown as a team all day, competing against some of the best players in Britain (Pick Six made it 14). As a result of this, I think its only right to give Leon Klosowicz the attention he has earned.

Simply put, Leon has the best natural instincts and timing of any player I have ever researched. However, this is also not something that has come recently, as it’s clear from the film and game tape that he has always possessed these qualities. This is evident in games from 2016-2020 in which he dominated France U19, Selwyn House of Canada, most universities in the Premier Division, Great Britain Senior teammates and London Blitz and Warriors teams… just to name a few. During these games, he executes blitzes with deadly precision, often resulting in losses of yards or big plays for the Defence. It is genuinely frightening how often he breaks through the line of scrimmage. To make you understand I have found some numbers.

During 100 snaps of football, Leon made exactly 50 contributions to the plays. Resulting in a 50% effect per 100 possessions, this is a measurement of tackles, disruption or coverage that end the play. Overall on these 100 possessions, Leon registered 28 tackles, 14 disruptions and 8 shows of good coverage. Not only is this a very impressive total, but many times over the three games I reviewed opposition would avoid him on certain run packages, because of his prowess in that Middle Linebacker position. This speaks volumes on his abilities and respect around the community we in the UK have built. Continuing from this Leon showed a wide array of high-level skills that he has gradually added throughout his time with PRIDE, Aztecs and the Bullets. When I watched games with under a year between its stunning to see the strides he has made, utilizing swim moves and faints to draw offensive fouls. Lastly, I feel it is important to mention that he knows every single aliment for his front seven, his football IQ is something to be admired and is very comparable to NCAA talents.

To conclude, Leon is exactly the player that you need on your team, but you hate to play against. Trash talk and relentless pressure during practices and games alike, are the reason he is so good at getting into the head of the opposition and forcing mistakes. His fundamentals are as solid as they come, tackling wise he uses his knowledge of body mechanics and strength to hit big and hit very hard. Fast hands and good footwork apply to his playmaking abilities, standout games and tempo changing tackles have defined Leon’s career so far. Overall it is clear to see that he has a multitude of tools in his arsenal, finely sculpted to mentally and physically put his opposition into situations that force mistakes and earn him dominating performances. Prediction wise, I see a big win coming against Leeds in the Quarterfinals, a defensive slugfest in the semis with Stirling. Finally resulting in a finals win for Dan Maher and his Bullets.