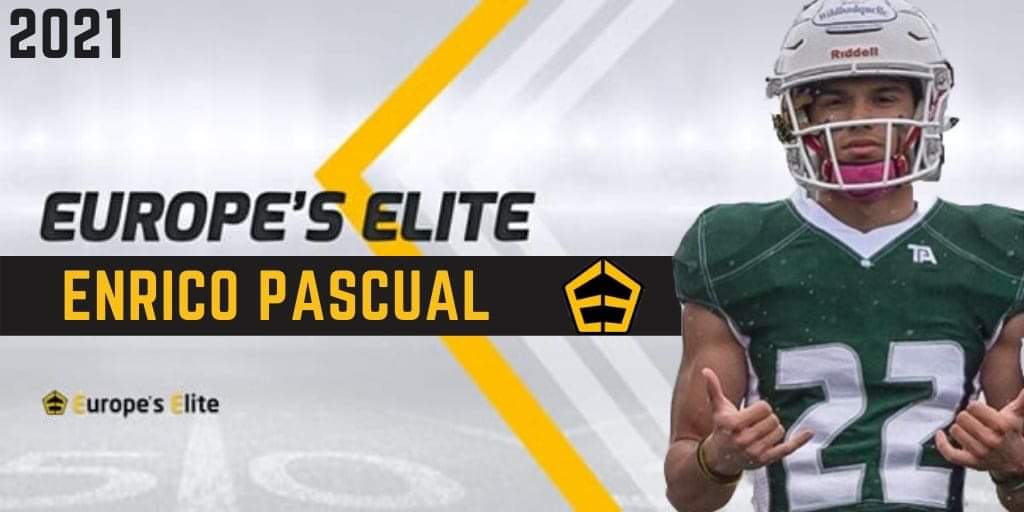 In many ways football is an art form, in particular, there is nothing more poetic than a deep ball being high pointed by a wideout and coming down to make the play. It takes a certain player to be able to pull off the acrobatics and hold the concentration all the way through the movement. During this week I’ve been captivated by Enrico Pascual’s ability to play the deep threat and “take the lid off” opposing secondaries. A dynamic Wide receiver playing for the prestigious Schwabisch Hall Unicorns since 2018, but hailing from Stuttgart, Enrico has what it takes to become an elite NCAA talent. Standing at 6’0 175lbs he’s only going to fill out more as he gets older, but the fact he is running at 4.4 40 -yard-dash and 10.7 on the 100 meters is what sets him apart from the rest. However, he is not just an athlete but also an extraordinary football with a lot of upsides.

The natural athleticism is, of course, a factor, and it’s there from the very start of the film. He is creating separation with a combination of a low centre of balance and footwork that has clearly been sculpted. This footwork expands to other areas of his game, his release is quick, and he doesn’t wait for the DB to make the first move. He uses body position to aggressively go up for the contested catches, more often than not he comes down with it. Even more impressively he balances himself out and can add additional yardage after the catch, over the last 2 seasons he has managed to compile over 1700 yards and 13 Touchdowns in the GFL, arguably the most competitive European league available. The small things are overlooked unless studied, the hand positioning, flawless timing on the jump ball and effectiveness in traffic are all things that take an extraordinary amount of time to perfect. It’s clear to see that the work has paid off with him being tipped to have a great year this season if he remains a Unicorn.

If adopted into the right scheme, Enrico could easily break into the D2/D1AA as a deep threat. The way he tracks the ball in the air is rarely seen by players in general, regardless of age or experience. There’s no doubt that he is a born playmaker with tremendous upside, it seems as if the Unicorns intend to use him as their go-to player for a 40-50-yard gain. Overall, a great ballplayer with potential at the next level, a reliable target with defined fundamentals who has taken the time to craft his game to exactly what every top-level team needs.