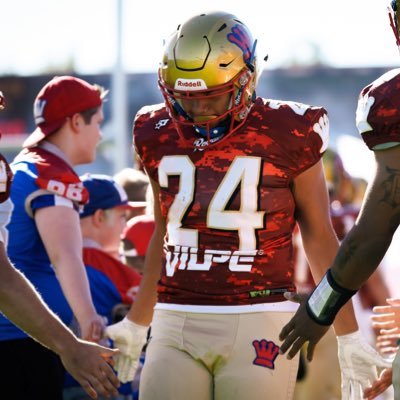 Nico Barrow is one of the best young runnning backs that Europe has to offer.  Barrow is a young running back who plays for the Wasa Royals in Finland’s top league. Although Nico is just a teenage , he has been dominating the men’s league for the past two seasons. His combination of size , speed, and natrual play making ability has allowed him to stand above the rest of his competion.  Recently we recognized Nico as a top 10 running back in the international class of 2022.  He is also ranked 33rd overall in his recruit his class.  Recently we sat down with Nico.

What is your favorite football moment of your life?

Probably would have to be winning the U20 championship game and earning the MVP award.

What goals do you have for yourself as a player this year?

My goals for myself this year are to keep improving as a player, help my team win a championship and to be a key contributor in doing so.

What career would you follow outside of being a professional athlete?

I would probably be studying sports science or to be a physiotherapist.

How do you handle the challenges in life and in football?

I love challenges in football, if it’s easy, its boring and as far as life challenges I take them how they come and handle them but so that I don’t lose myself in the process.

If you could meet and train with any football player in the world for 1 week, who would it be and why?

Definitely Marshawn Lynch just because he is such a character and as a kid, I used to watch his highlights everyday.

What do you love about football?

The brotherhood between your teammates and the mix of violence and strategy. You get to hit someone full speed legally, I think that’s pretty awesome. I also like the whole football community in Europe.

How are you preparing for your next season?

Offseason is in full effect. Right now, hitting the gym 4-5 times a week trying to build the engine as big as I can.

What should people know about athletes from Finland?

That Finland got a lot of real ballers out here.

How many college coaches have contacted you in regards to recruiting?

A few, not enough.

What are you looking forward to in 2022?

Looking forward to winning a championship and staying healthy, cant wait to be on the field again.