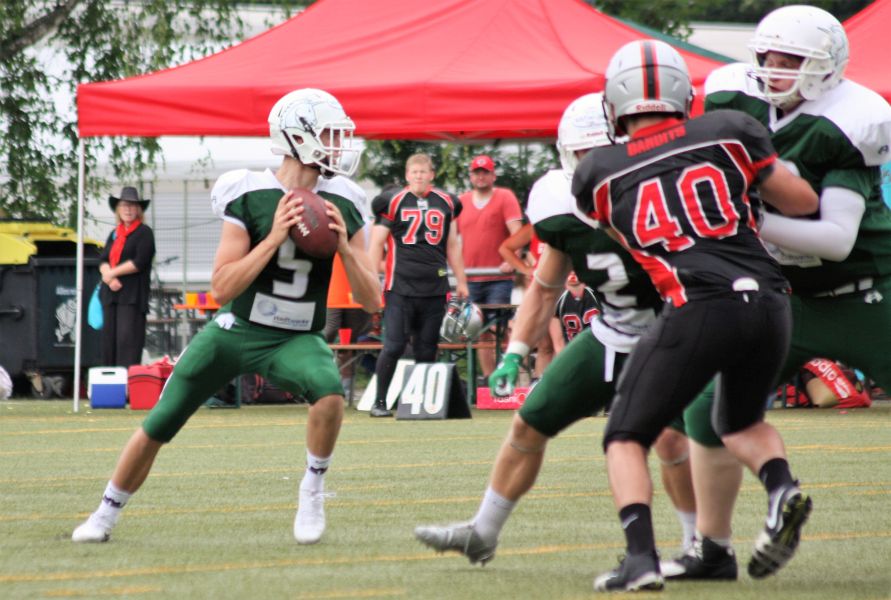 This weekend, in the GFL South, the Schwäbisch Hall Unicorns claimed outright lead in the division, with a comfortable 42-6 victory over the Mannheim Bandits. With this victory, the Unicorns move to 7-1 on the season, and take one step closer to reclaiming the German Championship.

It was clear from the offset that this was simply going to be a good day for the Unicorns. A clinical opening drive resulted in a QB sneak at the one-yard line. However, a fumble ensued, onto which Unicorns lineman Rouven Debus fell for the opening score: a great moment for the big man, as well as a clear indicator that lady luck was with the Hallers on the day. The fumble was the only shakey moment for Unicorns QB Louis Waldmann, however, who had a stellar outing on the whole. Attacking the Bandits’ primary weakness – their pass coverage – Waldmann marched his team up and down the field, to the tune of three passing touchdowns. Indeed, the Unicorns offence not only showed its star power, but also its versatility, with seven different players putting points on the board.

The Bandits offence, meanwhile, stalled due to their starting QB being unfortunately missing from the fixture. Whilst both backups performed to the best of their abilities, this limited their offensive production. As their HC Nicholas Barrie admitted, such an issue is difficult to overcome, especially against such a high-quality opponent as the Unicorns.

With this result the Unicorns keep destiny in their own hands, topping the division by a mere half a game (ahead of the 6-1-1 Stuttgart Scorpions). The Bandits, meanwhile, are sure to want to close out their season on a high, with a tough matchup against the Freiburg Sacristans.