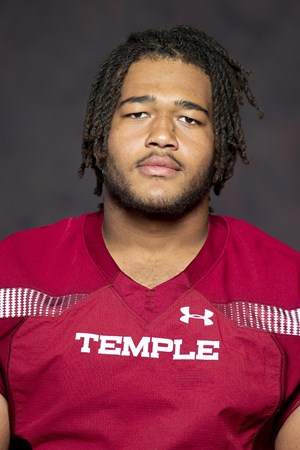 The starting left tackle for the University of Temple is originally from Örebro, Sweden. Isaac “Moose” Moore is a 6 foot 7in and 305lb athlete that holds one of the largest responsibilities in football. Whoever would’ve thought that a young guy from Sweden would be responsible for protecting a QB’s blindside on a Saturday afternoon.

Isaac first got into football at the age of 15 due to a simple invite. He only even attended a football practice because one of his friends invited him and said his team needed big guys. Lucky for the Örebro Knights, the then young Isaac Moore immediately fell in love with the game. But it wasn’t until a few years later when Isaac began to consider making a career out of football.

” I never knew I was D1, I just knew I was a big fish in a small pound when playing U-19 in Sweden. But when I realized I was the same size as many D1 athletes, I knew I could compete on this level.” – Isaac Moore

But one still may ask, how did Isaac get to Temple University? Of course, his size and athleticism are very hard to ignore, but Isaac was still an international athlete. As we know, international athletes have to put work very hard to be noticed by college recruiters. Nonetheless, Isaac’s journey can serve as an example. No matter where you are from, as long as you work hard and remained determined you can accomplish anything. But Isaac surely made his process sound simple.

“I sent a workout tape to them (Temple University ), then I met with the coaches in person and got offered on the spot. I received my first scholarship offer from Towson University and that felt great to receive. It made me feel like all the early mornings and workouts have been worth it. But after I saw practice at Temple, that resonated with me and I knew I wanted to play here.” – Isaac Moore

The race to earning an NCAA D1 scholarship for Isaac has been completed. He is now a starting offensive lineman for a top team in the American Athletic Conference. But the marathon continues for young Isaac Moore as his goals extend beyond these simple but admirable accomplishments. Lastly, Isaac had this to say for all young athletes in Europe.

“That nothing beats hard work, being flexible and strong is looked at more so than the game film from Europe. That if you keep working and don’t look back you can have anything you want in life.“- Isaac Moore