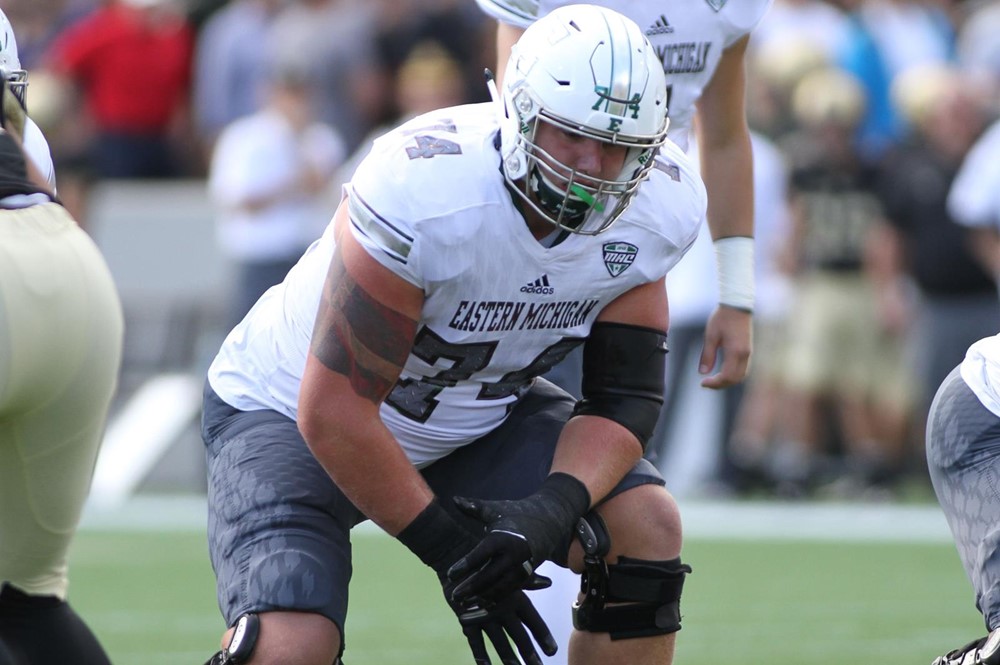 A new era of European American football is fast approaching. Leading the charge into the new decade are the athletes earning their stripes in the US in the college ranks, West Virginia, Michigan, Utah and Georgia Tech all contributing to the progression of the game. As a result of this exposure, the NFL has taken notice. The draft is right around the corner and one certain offensive tackle has been creeping onto draft boards through the league. A certain 6’8 300lbs Danish man mountain by the name of Steven Nielsen, an Eastern Michigan State prospect with huge potential at the next level. Over the last week, I’ve watched hours of NFL calibre tape and I firmly believe Nielsen has what it takes to make it to the league.

Steven Nielsen started his football career in Denmark, at the age of 13 he found his hometown Demons before switching to the Oresteden Spartans in 2012. Following his success, he made the decision to attend high school in the states to gravitate more attention to his obvious talents. One very long flight later he landed in Indiana for his junior and senior year at La Lumiere high school, and in came the flow of offers from Division one school. It was Eastern Michigan that captured his attention early with a family orientated culture as well as a talented roster and coaching staff. Steven was off the blocks without hesitation and gained the starting job at either tackle position halfway through his freshman year. He never gave it up throughout his career. This past season he proved his prestige by being awarded “Most Outstanding Lineman”, an award that is sure to have turned a few heads.

The 2020 draft is not far away, and Europe awaits its next NFL hopeful, Nielsen’s game translates well to the next level with tremendous kick steps in his pass protection that are evident often in his film. Secondly, during the film, I noticed how much time he was giving his Quarterback in the pocket, on average he was allowing 3.01 seconds to throw the ball. This is comparable to Riley Reiff of the Minnesota Vikings, being in the top 5 for height also can’t hurt his stock during his workouts. Pass protection is certainly a strong point of Nielsen, his football IQ and awareness during screens, draws, designed Quarterback runs and improvising on broken plays are also bound to impress the league, it is certainly something that he has crafted to the highest standards.

Overall, I believe that Nielsen is the next of a long line of Danes to make the jump to the league. He also believes that Europeans are getting more exposure and recruitment from college teams. There’s no doubt that he is an inspiration to a young generation trying to archive what he has accomplished, and there will be players following in his footsteps in the future. I asked Steven if he had contact with any teams and he replied with the following “I can’t name specific teams, but yeah I have been in contact with teams”. This only furthers the excitement, I noticed both the Texans and Patriots have late-round picks and a need for versatile tackles so come April hopefully the Great Dane will have his opportunity to show the league what Europe has to offer.