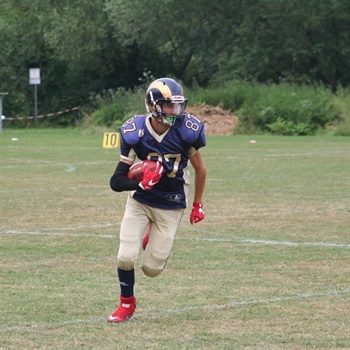 If we had describe Emil Rabin in one word it would be it would be tenacious. Emil is a young athlete from Nurnberg, Bavaria in Germany whom plays for the Nurnberg, Rams . The 6’2 180lbs , 17yr old ball player can be seen playing Wide Receiver, Defensive Back, and Kick Returner. The main thing that sets Emil apart from other athlete’s on the field is his level of aggression and competitiveness. It doesn’t take long while watching Emil’s film to see that he can easily over power his opponent in competiton. Emil Rabin is soon to be one of Europe’s ELITE ATHLETE’S!

How long have you been playing football and what positions do you play?

Who is one player you love to watch and learn from?

What has the game of football taught you?

Check out Emil’s highlight’s below and be sure to share this article with someone you know. At Europe’s Elite we use this platform to give young athletes the exposure they deserve.