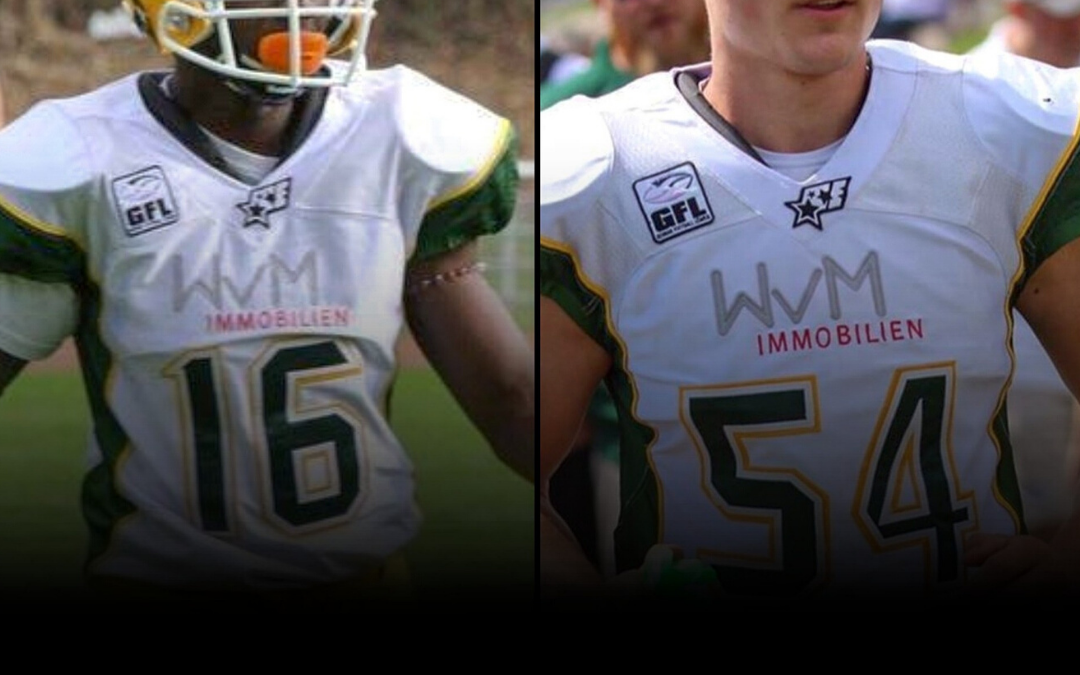 The number of athletes from European countries that are beginning to be recognized as legitimate college recruits is absolutely astounding. Over the best few years we have seen numerous athletes from countries such as Germany, France, Spain, Italy, Norway, Sweden, and more, receive scholarship offers from colleges in the US. It has become commonplace to hear about one athlete from some clubs to gain some recognition from college scouts. But it is a very special thing to see when two athletes, from the same team, move on to the college level. Needless to say, the work that the Cologne Crocodiles are doing within their community can not go unnoticed.

This past week the Crocodiles interviewed two alumni to their youth program who are moving on to college football. Defensive Back Richard Agyukem will be attending North Dakota University this fall, while Lineback Tim Steins will be attending Minot State University. Check out their entire interview below.

Richard, the youth player of the Netherlands, switched from the Amsterdam Panthers to the Crocodiles for the 2019 season. As DB and WR, he played an important part in winning the title in the Junior Bowl. From 2020 he will be working for the Div. Play 1 team from the University of North Dakota. We did a short interview with him:

Crocodiles: What was the reason for you to join the Crocodiles?

Richard: The reason for me to join the Crocodiles was, that I was looking for a team in Germany and I already played against the Crocodiles twice and knew it was a strong team with a great program and great coaches.

Richard: The experience I will take with me will be everything I learned throughout the whole season on and off the field. Even though I didn’t speak the same language as most of the players in the team, they still took me in as a family member and gave me an awesome season I won’t forget.

Crocodiles : What are your expectations for your time in the USA?

Crocodiles: Thank you very much for your time, Richard and good luck for your future.

“At the beginning of every winter training session, there are a lot of new players who want to try football. If you’re lucky as a coach, talented players are there. Very rarely there is a new player who can be seen quickly. Not only will he become an extraordinary player, he will immediately make our entire team better.

Richard was such a player. He has more than proven this during his time at the U19. With his passion for athletic competition and his infectious enthusiasm, Richard was an absolute support for our team from the first training session to winning the junior bowl and also provided a lot of highlights in defense and offense and in the special teams. But not only because of his outstanding sporting skills, but especially thanks to his positive personality and his unrestrained zeal for training, Richard has constantly improved himself and his teammates. I wish Richard that he continues to work so hard on himself. Then I am sure that all of his dreams will come true ”.

Now to another player who already switched from the Aachen Vampires to the Crocodiles for the 2018 season. As a linebacker, he contributed to the Junior Bowl victory last season. Tim will play for Minot State University in 2020. We also had a short interview with Tim.

Crocodiles: What made you switch to the Crocodiles?

Tim: The main reason why I decided to switch to the Crocodiles was to challenge and promote myself. I took the step with 2 friends who also wanted to increase their understanding of football and above all their performance and the challenge.

Tim: Above all, I take with me the start where Coach Jörn and Coach Charlie taught me technology and explained football. The biggest event, however, was winning the German championship.

Crocodies: What are your expectations for your time in the USA?

Tim: I expect funding, but above all a demand to improve and further develop my understanding of football.

Crocodiles: Thank you for your time and we wish you all the best for your future.

“Tim Steins is an exemplary team player with extraordinary athletic skills, healthy ambition and absolute commitment. Having fun always means that he does not lack the necessary seriousness and motivates his teammates to perform at their best. It is an enrichment for every team and a pleasure to have him with him. I am sure that he will take a successful path and wish him every success and all the best. ”

Read the original article by Jessica Ewald on the Cologne Crocodiles website.