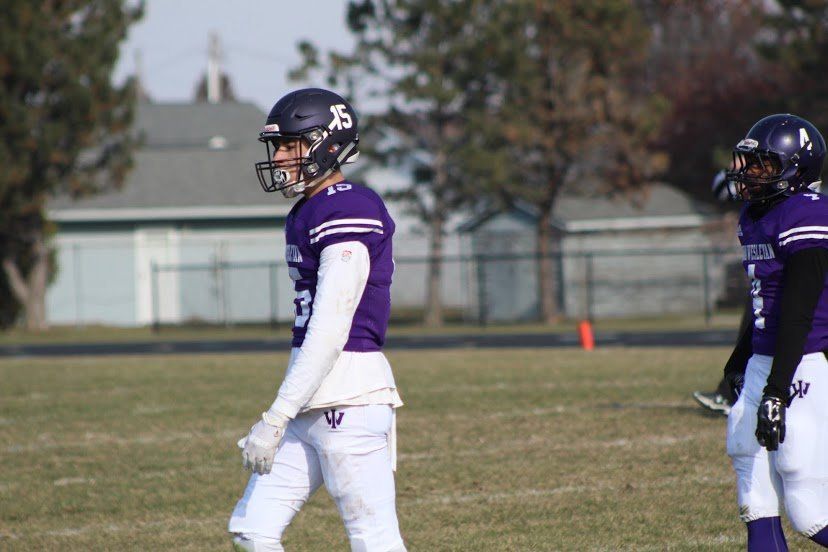 Truly elite size is rare to find in a Wide Receiver. Even more so when its coupled with good hands and an eye for contact. These are a few of the qualities that will be covered in the analysis of Ben Thomas. The former Solent Seahawk turned NCAA division 3 prospect at Iowa Wesleyan University.

Ben plays at a level that most UK leagues can’t compare too. Located in Mount Pleasant, Iowa, the Tigers play good competition in the NCAA. Having said this, he has still managed to put up solid numbers in a slightly shortened season. Averaging 12.8 yards a catch and having a definite speciality on post routes, he is able to rack up yards after the catch using his 6’5 195lbs frame. This season didn’t product for the program but being in his sophomore season Ben could be the difference maker going forward if he can continue on his progressions.

In terms of the strengths, Ben’s willingness to carry several defenders is impressive. For example, a 26-yard Touchdown against University of Northwestern – St Paul. He takes four defenders ten yards on his back on his way to the Endzone. Secondly, on the tape his good hands come out early. Slightly over thrown passes are catchable because of his long wingspan and concentration through the contact. Continuing from this, contested catches on routes such as his favourite post option and curl routes are made to look easy. Not to exclude his catches from screen plays where his can exhibit his long striding motions to gain big yards. One thing that did surprise me is his speed. With long limbs and natural quickness, he almost glides past defenders with big gains aplenty. Lastly, route running, in particular: Outs, posts and fades are all ran confidently and aren’t obvious for Defences to read. Ben showed toe taps on the side-line, this is a skill that is very hard to learn. Displaying his grind and grit on the field as well as the weight room.

Regarding weaknesses I saw during the film, I noticed that the routes ran are limited to a short list of different plays. This may be down to the fact he runs them so well. However, it also seems to be coaching to the opposition’s defensive adjustments (watch long screen vs off coverage). Another small weakness, that isn’t necessarily detrimental is that Ben doesn’t go for spins or jukes, he much prefers to take the contact and fall for extra yards. As said earlier, if he’s good at it then there isn’t need to stop.

To conclude, Ben has used his natural abilities and a hardnosed work ethic to go far, representing Solent and the UK in the US levels. We can see comparisons to Demaryius Thomas, hard run style, long frame and good hands all similar in the footage. Prediction wise, I’m going to give what I think Ben can get in his Junior season because he has already made it to the US. I think, if he avoids injury, a 600-yard 5 Touchdown season would be a good building block for his earlier career.

Europe’s Elite is the best news source covering rising athletes from and throughout Europe. Check Ben’s most recent highlight tape below to be a witness to his talent that go him to the NCAA . ELITE ATHLETES. ELITE TEAMS. ELITE STORIES