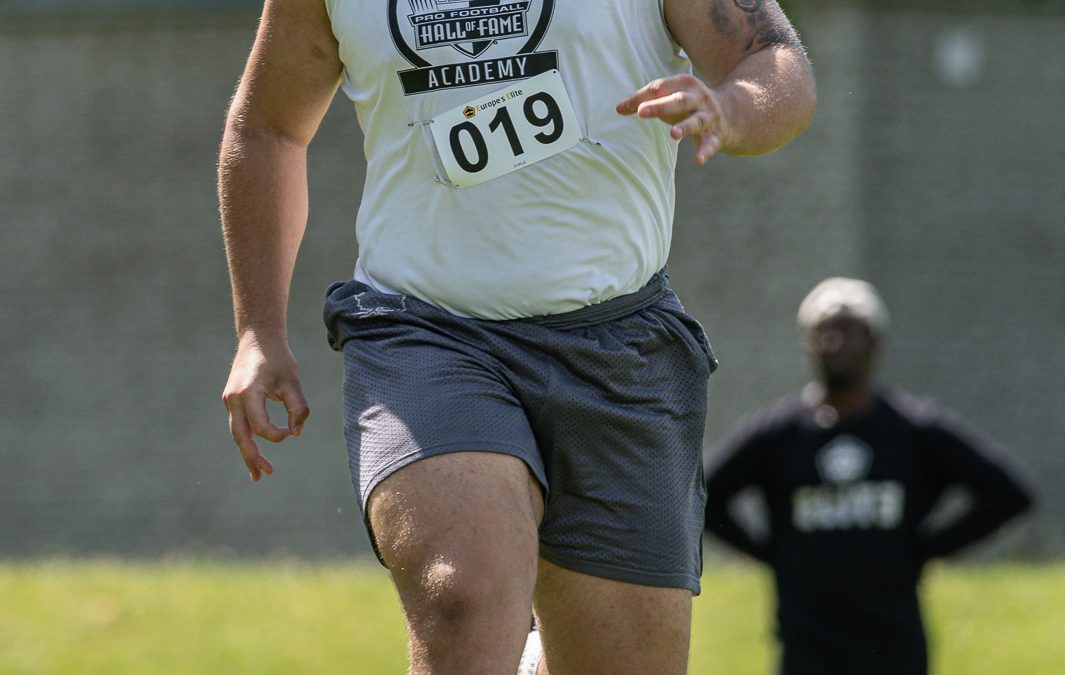 The flurry of Denmark talent climbing the rankings are yet to stop, however, Keenan is certainly not a new face to many of the media and scouts in Europe. The 6’4 280lbs beast has been terrorising defensive linemen in various countries for nearly a decade, starting since he was 10 years old with his hometown Frederikssund Oaks, who are quickly becoming a powerhouse for producing top-level talent through Europe and the US. When he was 16, he took his talents to Centennial High in Boise Idaho, combining his natural gifts with the best experience available. Later attending the prestigious HoF camps in Ohio and earning an invitational to the World Bowl in Mexico before the global pandemic sadly cancelled the event. It is evident that his portfolio is stacked, and no one can dispute his pedigree, further camps in 2020 have been cancelled but there is no doubt he will impact everyone watching at those he attends.

Keenan is undisputedly a very explosive athlete, the power he’s able to generate is phenomenal. Combining 20 reps of 225lbs and excellent leg power to drive through the opposition on the outside, often resulting in stacks of pancakes. More than I’ve ever seen on a highlight reel. The execution of his footwork is outstanding, he easily adapts from speed ends to players trying to surprise with a bull rush by adjusting his feet and using their momentum to throw them into the dirt. There was one statistic I found astonishing is that through the course of the season he allowed zero sacks at his end, playing predominantly at the blindside tackle this is an impressive feat. Staring as the best lineman on his team he also plays on the defensive side of the ball making a huge impact as an interior force, he is the definition of an iron man player.

The physical gifts are crystal clear from the first sight, further into the tape Keenan’s gifts reveal themselves. His exceptional football IQ is glaring, he is aware of opposing schemes and makes his reads with deadly precision and aggressiveness, resulting his being top of the top-rated OL in Europe and his 2021 class. There is no doubt he will rise higher in the ranking with a highly regarded showing at Europe’s Elite camp and the season hopefully still going ahead through 2020-2021. The ability to stonewall a 240lb man is rare to find, the added skills of slick handwork and athleticism to block on the second level to allow to the running back to rip a 50-yard gain is remarkable. My answer to that would be Kennan Wilson.

To conclude, after hearing the weight I put onto Keenan Wilson viewing his highlights is a must. He is a sleeper player who is finally getting the recognition he deserves, his near unrivalled dexterity on the offensive line will earn him many opportunities at the NCAA level, he has done an amazing job combining his natural gifts with hard work to produce a force that will protect some great quarterbacks soon.