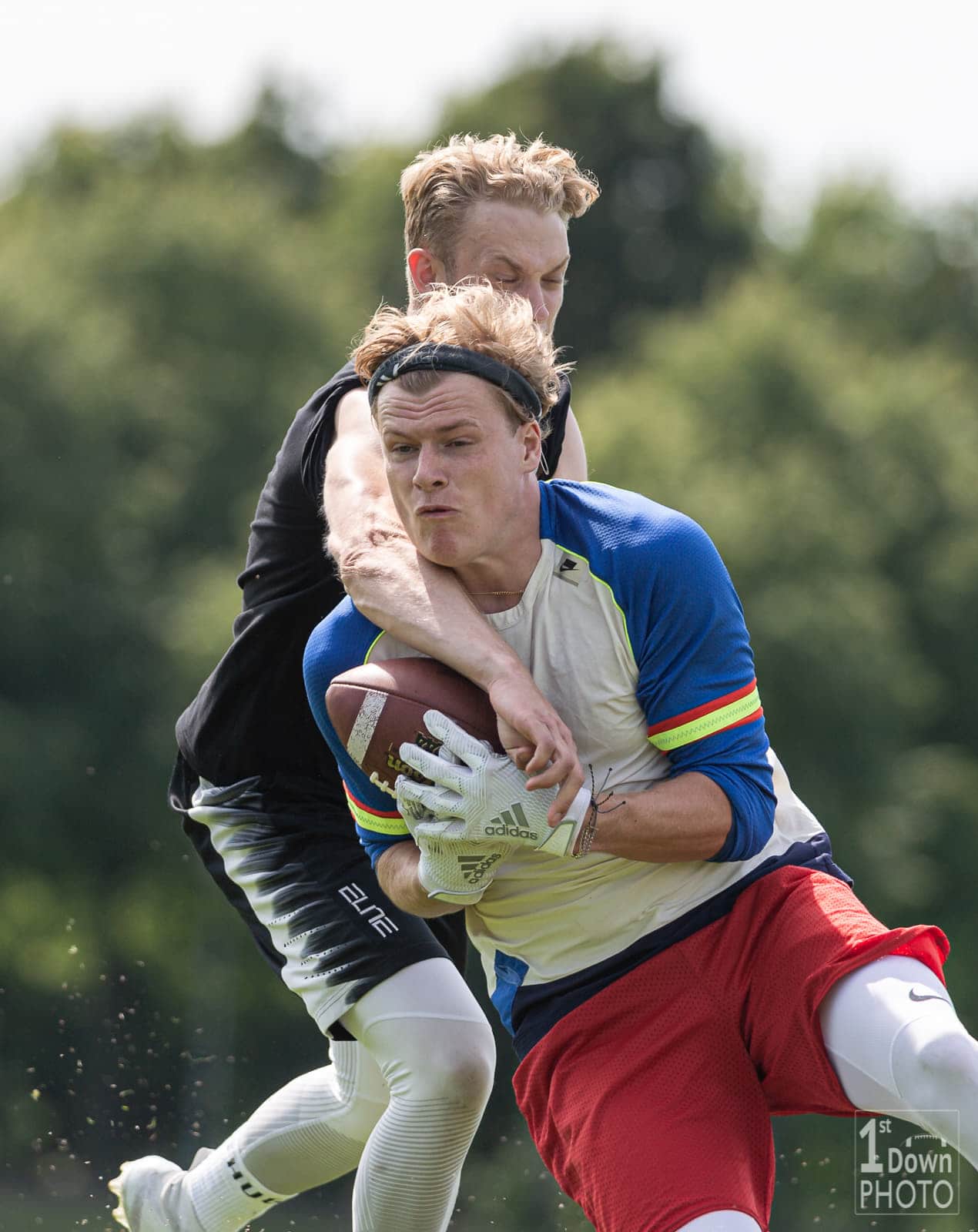 During my study of a player’s film, I like to note down aspects that stand out to me, potential points of interest and factors of a player’s game that are particularly special. Magnus Urth had my page full in under two minutes of tape. Instantly by watching its evident that he’s a special athlete, speed around the corners to beat seven-plus players, turning a blocked punt into a 40-yard gain (yes, a real thing) and snapping ankles regularly either from a tight route or a juke inside. Magnus himself sums it up best “Playmakers make plays”. He’s certainly right and his Top 150 rank is sure to increase with the next update with a strong case in Denmark at the recent showcase.

Another product of the Aarhus Tigers, Magnus has made a huge impact in his first National league games. His diversity is a big contributing factor, he burned teams taking the ball on WR sweeps, deep posts, screens, slants and as a tremendous deep threat. What makes him so versatile is abundantly obvious, it’s his laser-sharp route running and his speed. The separation he creates by perfectly timing his cuts to leave the defenders completely and utterly scrambled is so special that I may have never seen it from a player who is still growing in his development. Id advise anyone to watch the clinic he puts on during his tape, he sinks his hips fluidly and naturally with no tell signs and when he gets the ball in his hands it’s a scary sight. Many players have been victimised by a patented juke move. One play he leaves someone stuck in the dirt and before you know it, he’s 20-yards past him in the endzone, the defender hasn’t even turned around yet.

Now that his routes and speed have been covered, it’s important to mention he’s not just a wideout that burns the opposition and earns easy looks. Magnus is more than happy to jump over a DB to high point the football, he understands timing and the art of body control, demonstrating a high knowledge of the game. Furthermore, his hand placement in traffic as well as with high and low catches is impressive, but what caught my eye was the toe taps on the side-line and the awareness to drag his toes even through large amounts of contact. Magnus also contributes on the special teams’ side of the ball, rearranging players pads with explosive blocking as well as kicking (causing two fumbles) and returning kicks for long gains applying his lateral speed and quickness to damage teams.

To conclude, Magnus is possibly one of the fastest rising talents on the top 150, he is going to keep going rising as he keeps getting more attention. He’s certainly making an impact with people watching around Europe, making a name for himself and getting on the radar. He has already added experience in Minnesota playing high school football, as well as playing for the national team on two occasions. The sky is the limit for him and there’s no doubt his stock with continue to increase with him defining his skills and developing himself, his goals for this season is more production overall, leading the team in yards and targets isn’t too far of a reach and I have no doubt he is fully capable.