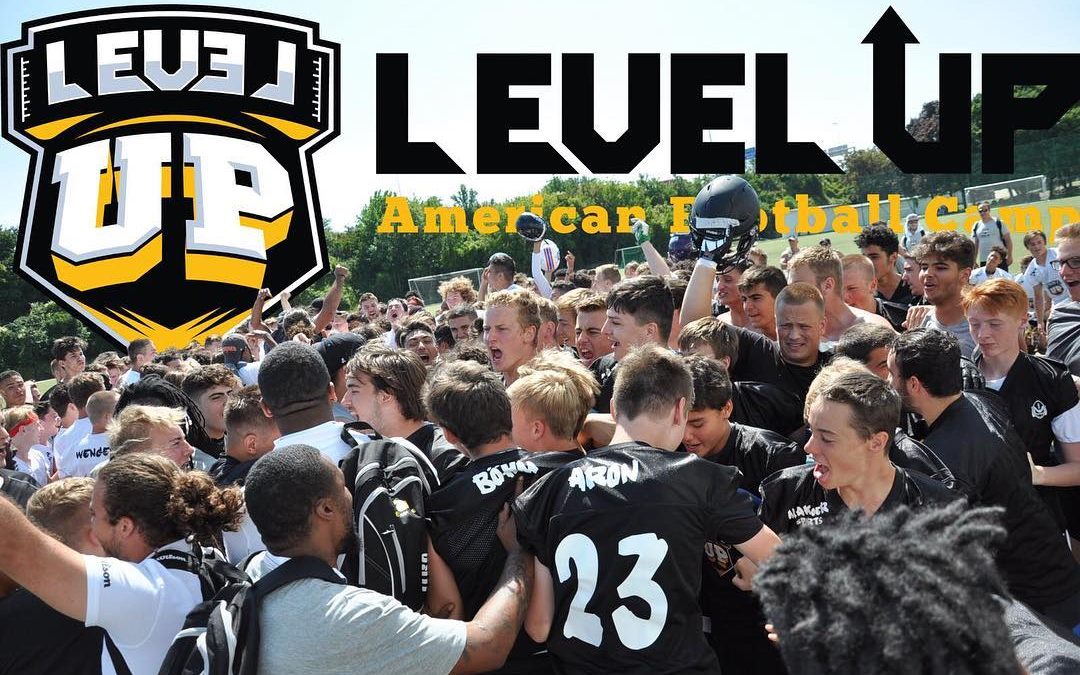 After the astonishing success of our Level Up Summer Camp, we wanted to show our appreciation for the week’s MVPs! So congratulations to the following for their awards!

We will start the list with the overall camp MVP, irrespective of position, Maceo Beard. The DB, who plays safety for the National Champion Pessac Kangourous and corner for the French U19 national team, impressed coaches and fellow campers alike with his strength in all aspects of his position. A self-proclaimed ball hawk, Beard accumulated 20 interceptions over the course of the camp, making him both feared and respected by opposition QBs. Not only that, but Beard’s size (6’2, 185lbs) and his speed mean he has the physical tools needed to progress to the next level!

Next comes Toby Naylor, who embodied the attitude and personality needed to succeed in this sport. Toby, who plays for Filton Pride and the Solent Seahawks in England, as well as the GB U19s team, is a natural leader, who is vocal with his teammates. This has been true throughout his playing career, being a captain for Solent at the Cadet, Youth and Junior levels. Naylor is not simply a motivator, however. At 6’2 and 220lbs, Naylor provides an intimidating presence in the middle of the field from his linebacker spot.

The whole point of the Level Up camps is for players to improve, and no one managed that more than Elijah Böhm, linebacker for the Salzburg Ducks. Weighing in at under 180lbs, Böhm has always been somewhat undersized for his position. However, his love of hitting, coupled with great coachability, has allowed his coaches to teach him how to predicates his game on speed, and utilise every bit of his size for his hits. Such improvement over a small period has really impressed everyone here at Europe’s Elite!

Despite his lack of prototypical size (barely cracking the 6 foot mark), Max Evenhuis impressed his coaches immensely at the camp. The people-mover showed off supreme athleticism despite his 320lbs frame, dominating at the point of attack against some supreme defensive talent. What makes this award all the more impressive is the fact that Evenhuis has only started playing OL this offseason, transitioning from Defensive line, which he had played up to this point for the Filton Pride. Picking up his new position incredibly quickly, Evenhuis is bound to thrive from here on out on Offence!

David de Diego has already made the jump stateside, and his year of experience there has clearly paid dividends, allowing him to immensely impress out coaches and win him the QB MVP award. The Spanish native played his first five years of football at the Las Rozas Black Demons but has recently moved to Colorado to play for Monarch High School in Louisville. Whilst de Diego does not have typical size for the position, he is nimble and fast, which combined with his accuracy makes him a potent weapon. With this varied skillset, de Diego fits the perfect mould for the modern college QB who need these dual threat capabilities to thrive.

Belgian born Joeri Van Tricht is no stranger to the physicality needed to succeed as a running back, having played at the senior level for the Brussels Black Angels during their two recent championship runs. He made sure to showcase this to everyone at the camp too, punishing opposing defenders who didn’t bring their A-game. Despite his size – 5’8, 180 lbs –Van Tricht styles himself as the Beligian Marshawn Lynch, running with power and ferocity which he has cultivated over his seven years in the sport. This play style has earned him the imposing nickname of ‘the Buffalo’ from his teammates, and an MVP award at our camp!

When Issai Aluko arrived at the Level Up camp, he did not cut the most imposing figure. Measuring in at just 5’6 and 143lbs, at times Aluko looked like a men amongst boys. He would then proceed to run rings around the very same opponents and make a fool of anyone who underestimated him. The diminutive receiver showcased incredible shiftiness and route-running ability which allows him to play above his size and create great separation from defenders. Virtually uncoverable from his position in the slot, the London Warriors receiver gave fits to opponents at the camp, and is bound to do the same throughout his career in England.

A sorely underutilised position across much of Europe, Marvin Müller showcased to all the importance and versatility that having an elite tight end can bring! A relative newcomer to the sport, having played only one year of the sport for his local team, the Troisdorf Jets in Germany, Müller came into the camp expecting to learn and improve. Whilst he certainly did those things, he also impressed all present with his natural feel for the game, as well as impressive physical toolset. At 6’5 he towers over many linebackers, causing mismatches for the offence and offering a safety blanket for his Quarterback. Whilst there are areas for improvement for such a new player, his raw talent as well as his willingness to take on contact both in blocks and whilst ball carrying point to Müller having a very bright future in the sport!

Starting off our defensive MVPs is Abel St. Amand, who won the MVP of the defensive line. The pass rushing specialist possesses a rare blend of speed and strength, running an incredible 4.59 40-yard dash, whilst putting up 14 reps of 100kg on the bench. Whilst at the camp, St. Amand not only dominated, but also utilised every rep as a learning experience. The young man tried to practice and perfect a different move or technique every time he ran a rep, not content to be a one-trick pony. It is work ethic like this that will lead Abel to even greater heights, hopefully allowing him to pursue his dream to play College Football in America!

Next up for our defenders is Slovakian linebacker Ivan Michalik. In a position renowned for its hot-headedness, Michalik plays with a cognisance uncommon for his age and experience.  His time playing for the Bratislava Monarchs at both Junior and Senior level has clearly aided his vision of the game immensely. However, this is not to say that Michalik is a wilting flower when it comes to contact. Far from it – he plays 100% every down, and throws himself into contact with enthusiasm. This love of contact, combined with his elite vision, has turned him into one of Europe’s premier young defenders.

Landry Esono-Sala did not let anything keep him down at our Level Up camp. Despite a luggage problem which left him without his own kit until the final day, Esono-Sala still impressed with his fluidity and ball skills as a defensive back. When his pads finally did arrive, and his full ability came to the fore, offensive players had to look out. Possessing great speed, and a knack for man-to-man coverage, Esono-Sala came away from the camp having left an impression on our coaches, and undoubtedly in the minds of the Quarterbacks he picked off too.

We here at Europe’s Elite have tried to reach out to all of our camp MVPs, but unfortunately have been unable to contact some. As such, we did not want to include you without your permission. If you would like to be added, please reach out to us at amclachlan@europeselite.com and we will add you right away!