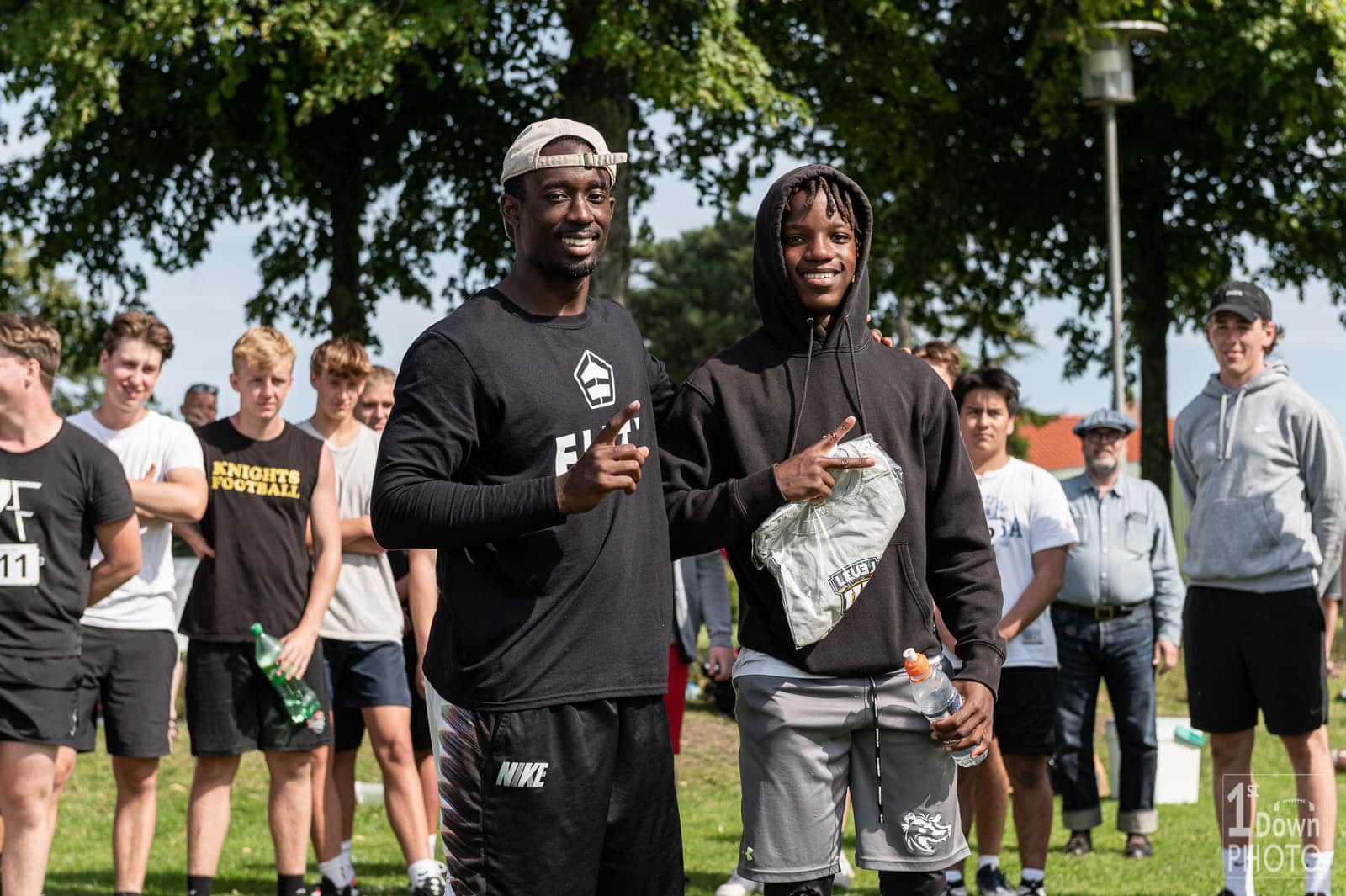 Photos by : 1st Down Photography

I’m a firm believer that everyone is given a gift in some sense, Noah Manene is very gifted in speed and his quickness. His recent performance in the Denmark showcase has garnered deserved attention after putting being named an MVP athlete in a special display. Noah certainly could be the next generation of deep threat wide receivers in Europe, at only 16 he has plenty of time to grow under the right system and coaching. However, he does already have several tools in his arsenal that he tested against top DB competition, it’s fair to say that they won’t forget him for a while.

Noah has demanded a tremendous amount of respect, he is still growing and slowly he is going to pack on the muscle but as DBs found out, he shouldn’t be underestimated. One factor that stood out for me was his adjustments to press coverage, against elite press corners he burned them. The sly back step he does to avoid the bump coverage has been something he has thoroughly crafted, it’s a broad step and allows him to use the space to deadly efficiently and then burst off the blocks into the open space. However, with his swift footwork, he can utilise more than just holes in the press, a smooth-running style leaves defenders trailing behind him. This is when he finishes their misery with his double move, I watched truly elite players fall to his move so I have no doubt he will feast on inexperience or players taking the playoff, leading to many long touchdowns.

This is not his only tricks, surprisingly sharp routes for a young player coupled his head fakes and hips that remain fluid throughout the full motions means out routes and slants will be a staple of his game as he continues to develop. Having such a good athletic ability has allowed him to take stride into rising the ranks to earn a potential top 150 ranking by his peers, the exhibit of lateral quickness and flow movement in his cuts are qualities that some experienced players still haven’t mastered, he’s done it at only 16. The practise he has put into his hands is ultimately paying off, showing multiple examples of his game knowledge by adjusting his body to differently thrown balls, either in the slot or as the wideout.

Further showing the flexibility and willingness to expand his horizons. In conclusion, Noah is a young talent with a lot of potentials, to be so young but already not just able to hang with the best defenders in Europe, but to put a few on skates with his sleek routes is an achievement. In the coming years, he is looking to continue to add to his skills and to put up numbers for his team. I’m waiting in anticipation to see his 40 when he is at his peak, he is a dangerous player and if he isn’t treated with respect, he could easily be the player to tear defences apart.