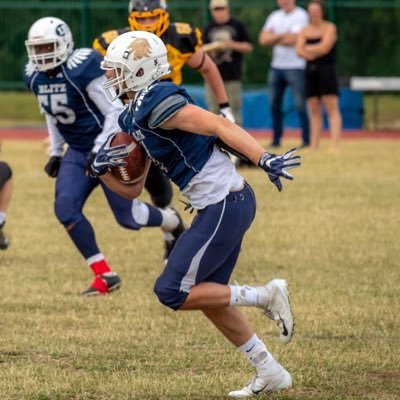 It’s rare that a player embodies the city they’re representing, Alex is a hardnosed, cold blooded killer on the field. The safety position is tailor made for people like Alex who are stoic in the face of adversity and thrive under the pressure, and for the last week I’ve been through the tape with a fine brush comb and I’ve broken it all down. I can safely say, we have an under rated talent on our hands in the UK scene.

Alex is a duel threat player at safety and outside linebacker for the London Blitz where he has won two U19 Championships and has been a stand out player throughout the seasons and undoubtedly in the season to come. This earned him a spot in the GB U19 team, European Warriors team and the NFL Academy in London respectively. Last season he had his season limited to 8 games but still managed to register 3 sacks in one quarter, alongside 4 interceptions, 1 forced fumble and 1 fumble recovery. Not to mention the collection of tempo changing hits he delivers on a strong Blitz defense.

On to the breakdown, usually we start with competition. BAFAs U19 leagues produces a lot of talent, however not everyone knows what they’re doing on some of the lower rated teams so not everyone has the experience to compete at the next level. On the reverse Alex is being trained by NFL standards in the academy and has also competed against American high school students and managed to prove himself by putting in a strong performance and a great heads up play to punch the ball out the running back’s arm. On that note we go into the second judgement, big play ability. Other than the forced fumble we have a multitude of interceptions with big returns averaging over 10 yards, having experienced Alex’s high points first hand as he jumped my play (Thank you Alex) I know he has a great ability to high point and get his feet down. He’s a ball hawk who jumps over thrown balls but my only criticism of this is would be that he doesn’t often cut through routes, he prefers to capitalize on mistakes which is why I believe he is best suited as a Nickle or a Prototype Outside-backer.

During the film we can easily identify the strengths because they really do burst off the screen. Blitzing, Catching, coverage, high points all shown at a high standard in the film. He hits hard and moves fast but also reads plays at a very impressive rate, he knows offensives and concepts. With this he outsmarts his opposition by not relying on athleticism but mixing it with his knowledge of the game and sharply tuned reactions. Lastly, I think his leadership is understated. He isn’t a player to trash talk, simply because he doesn’t need too, he’s already picked off your quarterback and he’s already rearranged your p ads when you come up for a fade jump ball. As everyone knows weaknesses need to be assessed when breaking down players. I mentioned earlier that Alex doesn’t cut through routes as much, he moves and waits on the over thrown balls, or he will hit the player after the catch. If he can add that to his arsenal it’ll improve his stock further. He has elite size for a Nickle or Safety but will have to add bulk to play linebacker at the next level, that’s why I think he would thrive in the right Dime package or Nickle system.

To conclude Alex is an extremely underrated player who I think can for sure play D1 in the right system with is natural gifts and football IQ. I would compare him to Minkah Fitzpatrick of the Pittsburgh Steelers with his versatile play style, ability to catch, return the turnover and force the ball out of the offence’s hands. I would highly recommend following him just to see how far he can get.

Check out Alex’s highlight tape below to witness his skill set for yourself. At Europe’s Elite we have built a platform covering numerous stories like this, granting athletes the exposure they deserve. Dream Elite.Reach Elite. Be Elite.